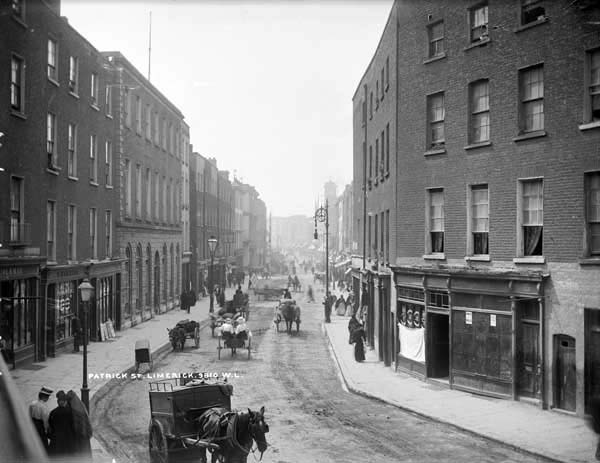 The following article by Peter M’Cluskey, an Australian travel writer with the The Bacchus Marsh Express newspaper, was published in 27 August 1892

Limerick is finely situated upon both banks of the Shannon and King’s Island, which is formed by the Abbey river. It is divided into three main districts -English town, which occupies the island; Irish town, which lies to the south of the island, these two constituting the old town; and Newton Perry, the chief business and residential districts of to-day.

From the peculiarities of its situation Limerick is rich in bridges. Three cross the Shannon-two of them being handsome structures. One, the Athlunkard bridge, is hardly within the town. It crosses a beautiful reach of the river above the city, and carries the Killaloe road. The Wellesley bridge, connecting NewtonPerry with the road from Ennis, is a fine specimen of modern engineering, and consists of fine arches, with a swivel on the city side.

Higher up the river is the Thomand bridge, which was the scene of many important events in the past history of the city. Few towns in the United Kingdom can exhibit such large structures so finely placed as those two bridges.

At the west end of Thomand bridge, raised upon a substantial pedestal which lifts it above the reach of the chipping tourists, stands the stone upon which, according to the popular belief, the Treaty of Limerick was signed in 1691. The history of this famous negotiation is long and complex. One of the articles stipulated that the Roman Catholics should enjoy the same privileges in the exercise of their religion as they had in the reign of Charles II., and that they were to be protected from religious persecution. This article does not seem to have been kept, and hence the name so often applied to Limerick “the city of the violated treaty.”

Thomand bridge, a beautiful structure at the east end, was King John’s castle. This has been greatly disfigured by the construction of an unsightly barracks, but it has not destroyed the fine effect of the old turrets and towers, rising above the bold arch of the bridge. The tower contains a peal of bells, noted for their sweetness of tone, and concerning which the following legend is related:-The founder of the bells, an Italian, having wandered through many lands, at last, after the lapse of many years, arrived on the Shannon one summer evening, and as he sailed up the river he was startled at hearing his long lost bells ring out a glorious chime. With intensified attention he listened to their tones, and when his companions tried to arouse him from his ecstasy they found he had died of joy.

Limerick is the last town in Ireland that surrendered to the army of William III., under General Ginkell. William himself marched upon Limerick, expecting an easy capture. It was only by Sarsfield’s energy and courage that the resolution was taken to resist to the last. Things looked gloomy indeed for the Irish cause. William and his army arrived and pitched their tents close to the city. At some distance in the rear followed ammunition trains and supplies together with some heavy ordnance and a bridge of ten boats. Sarsfield, with the skill of a true soldier, saw that his one supreme hope was to destroy the enemy’s train. A few hours therefore, after the English tents had been pitched before Limerick, Sarsfield sent, under cover of the night, a strong body of horse and dragoons who took the road to Killaloe, and crossed the Shannon there. During the day he lurked with his band in a wild mountain tract named from the silver mines it contains.

He learned in the evening that the detachment that guarded the English artillery had halted for the night seven miles from William’s camp, on a pleasant carpet of green turf, and under the ruined walls of an old castle; that officers and men seemed to think themselves perfectly safe; the beasts had been turned loose; and even the sentinels were dozing. When it was dark the Irish horsemen quitted their hiding places and were conducted by the people of the country to a spot where the escort lay asleep round the guns. The surprise was complete.

Some of the English sprang to their arms, and made an attempt to resist-but in vain; about sixty fell, only one was taken alive. The victorious Irish made a huge pile of the wagon: and pieces of cannon. Every gun was stuffed with powder, and fixed with its mouth in the ground, and the whole mass was blown up. The solitary prisoner, a lieutenant, was treated with great civility by Sarsfield. ; “If I had failed in this attempt,” said the gallant Irishman, ” I would have been off to France.;” Sarsfield then returned to Limerick, and William was compelled to retreat: Sarsfield held out for another year before he honourably capitulated to Ginkell. Limerick has long been a centre of considerable trade, and although at the present time there is a great depression in trade on account of the competition with America, there is no likelihood of the trade returning for some time.–[Note. Most of the above information is obtained from historians, including Macaulay.]

I had met several of my shipmates from America in many parts of Ireland-the youngmen that landed at Queenstown with me. They had also friends in the city, and we were invited to several parties and balls. The guests were mostly officers in the English army, and wore their uniform. The Yankees and the English officers seemed to agree very well together, and enjoyed themselves to their heart’s content. I am of opinion the Yankees were also soldiers of another kind, but did not wear any uniform. I wanted to know if those Irish Americans would like to live in Ireland, but they shook their heads solemnly and said ” no; it grieves us to see the people so poor; not one of us will stay here.” We had many long consultations for the benefit of the country. They were young, and of a different opinion on most topics to what I was. They were very hot-headed.

Limerick has some fine streets and handsome buildings. The manufacture is lace, of a very superior quality; flour mills; also fish hooks of a fine temper; but the principal industry that exhibits to the stranger most signs of prosperity is the pig killing and bacon and ham curing establishment. The shipping trade of Limerick has declined very much of late years.

I bid good-bye to my Limerick friends and took the train for Dublin through Tipperary, Queen’s County, and Kildare.