The Legend of the Bells of St. Mary’s Cathedral 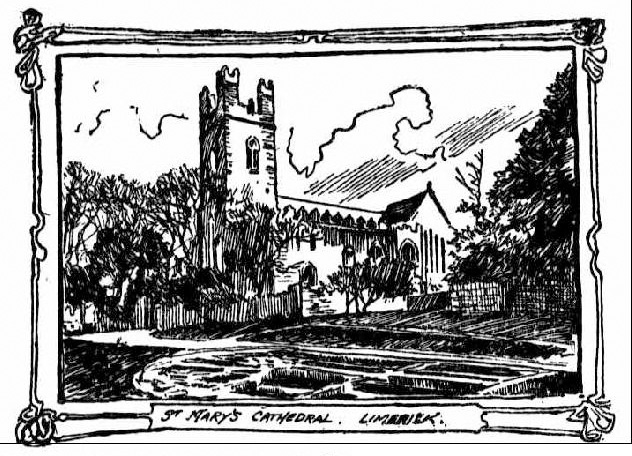 The tale of the bells of St. Mary’s Cathedral from The Catholic Press Thursday 31 March 1910:

The Legend of the Bells of Limerick- The remarkably fine bells of Limerick Cathedral were originally brought from Italy. They had been manufactured by a young Italian (whose name tradition has not preserved) and finished after the toil of many years; and he prided himself upon his work. They were subsequently purchased by the Prior of a neighbouring monastery, and with the money thus acquired the young man purchased a little villa, where he had the pleasure of hearing the chiming of his bells from the convent cliff and growing aged in the bosom of domestic happiness. 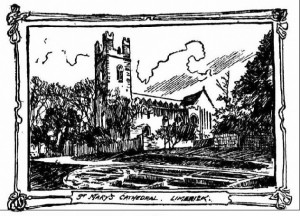 This, however, was not to last. In some of those broils, whether civil or foreign, which are the scourge, of a fallen land, the Italian was a sufferer among the many. He lost all, and, after the storm had passed, found himself amid the wreck of fortune, friends, family and home.

The monastery in which the bells had been hung was razed to the earth, and the bells carried away to a foreign land. The bell-founder became a wanderer over Europe. His hair grew grey and his heart withered — he had neither home nor friend.

In his desolation he formed the resolution of seeking the place to which the bells — those treasures of his memory — had been finally borne. After years of wandering ho sailed for Ireland, and proceeded up the Shannon. The vessel anchored, in the Pool, near Limerick The city was now before him, and he beheld St. Mary’s steeple lifting its turreted head above he smoke and mist of the old town.

He hired a small boat, for the purpose of landing. He sat in the stern, and looked fondly towards the Cathedral. It was an evening so calm and beautiful as to remind him of his own native skies in the sweetest time of the year — the death of the spring. The broad stream appeared like one smooth mirror, and the little vessel glided through it almost noiselessly. On a sudden, amid the general stillness, a bell rings the Angelus from the Cathedral towers, the rowers ceased rowing to pray, and the boat went slowly forward from the impulse it had received. Hardly was the Angelus finished when the bells chimed out.

The old Italian crossed his arms on his breast, and looked fondly towards the city. Home, happiness, early recollection, friends, family, all were in that sound, and with it wont to his heart. When the rowers looked round they beheld him with his face still turned back towards the Cathedral, but his eyes were closed; and when they landed, they found him dead! The emotion had been too much for his already weakened and decaying frame; the joy of discovering his long-lost tolls had killed him. – J. J. GLEESON