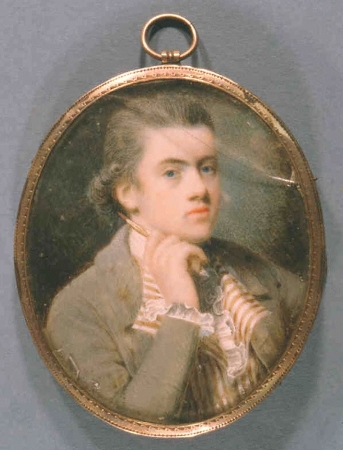 Timothy Collopy was born into a Roman Catholic family in Limerick in the mid-eighteen century. His first trade was as a bakers apprentice. His talent for art was noticed from a young age and he was sent to Rome to study. He was mostly known as a religious painter though he also worked as a portrait painter and restorer.

Following his death in London in 1811 some of his works were auctioned in Christies Auction Rooms. One of his paintings still hangs in Limerick today, The Ascension, which can be viewed in the Augustinian Church on O’Connell Street. The Ascension by Timothy Collopy

William Palmer was born in Limerick on the 18 November 1763 the son of a Protestant linen-draper. He exhibited a talent for  painting from a young age and by 18 he was studying in the Dublin Society School and had won a medal for his figure drawing. He was best known as a portrait painter. He died aged only 26 years in Bruff, Co. Limerick on the 29 July 1790. He is buried in his family plot in St. John’s Churchyard, John’s Square, Limerick.

A miniature self portrait of William Palmer, which contains strands of his hair on the reverse, is held in the Limerick Museum collection. 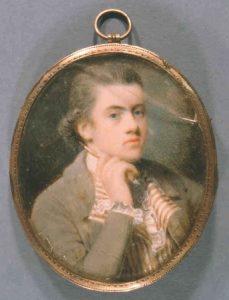 Jeremiah Hodges Mulcahy was born in Limerick on 12 September 1804, he was best known as a landscape painter. He was living in Lock Quay and working as a Portrait Painter when his wife Mary passed away in 1837. In January, 1842, he opened a School of Painting at 19 Catherine Street, Limerick, where he provided art classes for the gentry. He was an exhibitor in the Royal Hibernian Academy from 1843 to 1878.

He caused a scandal in Limerick in 1853 when he became involved with Christina Jackson, a girl under the age of 18. The pair married and had a child the following year. Following Christina’s death in 1862 he moved to Dublin where he lived out his years and died at his residence, 11 Avondale Terrace, Harold’s Cross, on 25th December, 1889, and was buried in Limerick.

Five illustrations from drawings by Jeremiah Mulcahy are in Samuel Carter Hall & Anna Maire Hall’s book “Ireland, its Scenery and Character” published in 1841. One of his paintings sold in 2006 in Christies Auction rooms, London for £43,200. 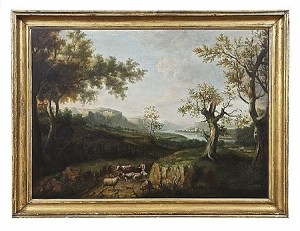 St. George Hare the son of a dentist was born in Limerick 5 July 1857. He initially trained in Limerick under Nicholas A. Brophy from 1872. In 1875, he was awarded a scholarship to the National Art Training School, South Kensington (later the Royal College of Art), London. He specialised in portrait and nude painting. He died in 1933 in London.

He exhibited regularly at the Royal Academy, RHA, Royal Institute of painters in watercolour, Royal Institute of oil painters, Royal Society of Artists, Birmingham and the Walker Gallery, Liverpool to name but a few. His work is included in the collections of the National Gallery of Ireland, RHA Collection, City Gallery of Art, Limerick, The Victoria and Albert Museum, London and the National Gallery of Victoria Melbourne. His painting have fetched thousands at auction. Many of his paintings are part of the English National Trust Collection. Douglas Alexander was born in 1871 in Bell-vue, North Circular Road, Limerick. The son of Samuel Alexander, of prominent Limerick Quaker family. As a youth Douglas trained as apprentice to a wholesale merchant to J&G  Boyd’s. Alexander is most famous for oil and watercolour images of the West of Ireland, particularly Connemara. Though he did branch out into portraits of people of note such as Michael Collins. Despite the prominence of his family in Limerick, Alexander died in poverty in 1945 in Dublin.

His paintings usually reach hundreds at auction though Reflections, Connemara sold for €5,500.

Portrait and figure painter, John Keating was born in Limerick on 28 September 1889. His father, Joseph Keating, was a bookkeeper at a bakery company. John, who had three brothers and three sisters, was educated at St Munchin’s College but was not a good attender, spending hours playing truant on the city’s docks. “I was always drawing and scribbling.

At the age of sixteen I had proved myself incapable of doing anything else. I was a dreamer and idler. My mother decided to send me to the ‘Technical School in Limerick for drawing’

Keating was commissioned by the ElectricitySupply Board in 1926 to execute a series of pictures illustrating the development of the hydro-electric schemeon the river Shannon. He lived with the workmen on the building site at Ardnacrusha. The series encompassed a group of drawings and paintings, twenty-six in all, showing the progress of the work until completion in 1929. 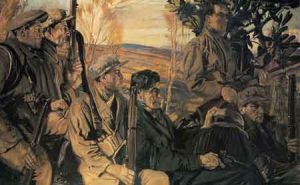