The Penal Chapel of Rebogue 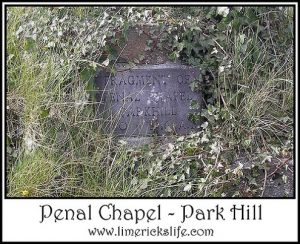 A small fragment is all that remains of the Penal Chapel that once stood on Parkhill, Rhebogue. This Penal Chapel served the Parish of St Patrick’s between 1750 and 1816. It was built by Richard Harrold who’s house was situated on the banks of the canal.

Parkhill Rhebogue, at the time the main road from Limerick to Dublin and was one of the main entry points into Limerick City.

Maurice Lenihan wrote in 1866 about the chapel:-

In 1750, chiefly through the piety and munificence of Richard Harold Esq. of Pennywell, a chapel was built of St Patrick’s Parish on Parkhill above Pennywell. In the hill the Williamites had a battery during the last sieges. The chapel having become ruinous, a site on his property was offered
free, by Mr Harold’s son on which to raise another by a more convenient
place on the lands of Monamuckey, nearer to the city and on a line with the new road to Dublin,
was chose in preference, where it was built.

After the building of St. Patrick’s Church on Clare Street (Monamuckey), the Penal Chapel was dismantled.