The Raleighs of Knocklong, a very rigid search 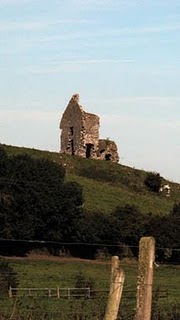 Last week I received an email asking the following: “I am looking to find someone to take pictures of my ancestors’ tombstones in Knocklong. I know that it is quite a ways south of Limerick City but I was hoping you might know someone who could do it for me.” I wrote back informing him that I could do it. Afterwards, he provided me with his family name, Raleigh. The following is the story of my subsequent adventure.

Monday I had the day off work so I began the search, which proved to be more difficult and interesting than first anticipated.  Before leaving I looked up the route online, but only jotted down a brief summary of the directions. This ended up being my journeys main downfall. All together, this quest would take me from Limerick, to Caherconlish, through Herbertstown, Hospital and finally leave me arriving in Knocklong.

I reached Caherconlish without too much trouble, and continued on the road to Hospital, after a few miles Herbertstown was signposted to the left but I continued straight for another few minutes. It didn’t take long for doubt to fester about my directions, so I backtracked and took the exit I had previously seen to Herbertstown. Herbertstown was a sad little place to drive through; it had all the appearances of a ghost town: boarded up buildings and the only visible sign of life was a lone road sweeper. I stopped the car next to him asked directions; he looked at me rather dubiously before telling me to go back the way I came. (Le Sigh)

So another about turn and I was on the way to Hospital. After dodging the road works and cars parked on the road I thought I was gone from the town, when I saw a sign pointing left for Knocklong. I took the quick exit, and drove up this bendy country road for an age, soon I got the feeling that I was going wrong again. I spotted a man cutting hedges up the way so I stopped  and he informed me I was on the road to Emly, that although I could get to Knocklong that way it would be easier to go back the way I came. So, what of the sign pointing up this road? Well, it was nothing more than the folly of youth.

I eventually reached Knocklong and started looking out for the church. I was once again perplexed that on leaving the town and crossing a bridge that I had not seen it. When suddenly like a beacon there was the sign Knocklong Church. (Hallelujah!) Once again I was on another windy country road, going seemingly nowhere, when I spotted a walking ESB worker, he informed me that the church was about half a mile further on but when asked about the graveyard, he drew a blank. 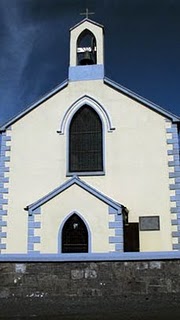 I continued with my forward momentum and sure enough, half a mile up the road and on the left, was the church and behind a rather large wall, the graveyard. Upon entering I realised that this was a modern graveyard and the names I was looking for were nowhere to be seen. Then I saw two men and a boy digging a grave, one of which was actually inside the grave. I approached them and asked if there was an older graveyard around somewhere, explaining to them that I was trying to find the headstones for a man in America. I found out that the man in the grave happened to be the caretaker of both graveyards, but he knew of no graves with that name in either site, unless they had no headstone. While this news was more than a little disappointing, he did tell me that there was a man living in the village by that name and he might be able to help me.

I was pointed in the direction of the old graveyard, “up the hill and through a field”; the vague directions had me travelling incredibly slow looking in every field along the path.  At one point I was stuck behind the car of a local who was having a chat to the Postman coming in the opposite direction. Once everyone saluted and went on their way I carried on with my search, but to no avail. Then I observed in the distance a ruin wall in a field beyond a field. Thinking that it may be the old church, I stopped the car on the side of the road and got a picture.

Along the road a little more I came to an old school house, built in 1879, which was now converted lovingly to a family home. At this point I decided to stop the search and returned home. 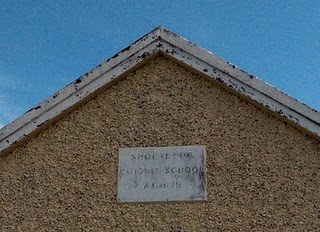 On my return home I thought to myself, if it was this difficult for me, someone who lives in Ireland, to find towns and churches, I imagine that it must be an interesting experience indeed for those who travel from England, America or Australia to find any trace of their ancestors.

Finally, any information on Raliegh’s from West Knocklong would be greatly appreciated, and would be passed along to the gentleman in America for his research.