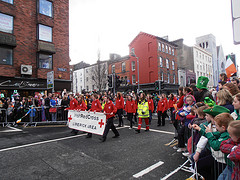 St Patrick’s Day in Limerick city is always a joyous family event. In 2012, more than 60,000 people lined O’Connell Street in Limerick. There were more than 4,000 individuals who took part in the actual parade, making it Ireland’s largest by participation. The city was fortunate to be blessed with a bright sunny Saturday, which added to the vibrant atmosphere of the day. The 2012 theme was ‘The World in Union’, which celebrated Limerick’s huge community base, its ethnicity and diversity. This not only reflected on the wide range of cultures present in Limerick, but also on the fact that St Patrick’s Day is now a global event.

There were more than 100 community groups, bands, charities and businesses that took part in the parade. The following prizes were awarded:

Mayor Jim Long said: “This is a great day for the people of Limerick. This is what Limerick is all about, and this is what Ireland is all about. A Happy St Patrick’s Day to everyone. We have the biggest parade in the country. It is one of the highlights of my year, and I have fully enjoyed it.”

Read the Full Article from the Limerick Leader.