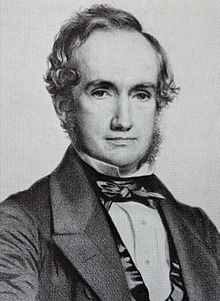 William Henry Harvey was born on 5 February 1811, into a prominent Quaker family. He was the youngest of Joseph Massey Harvey

(1764 – 1834) and Rebecca Mark’s eleven children. His father had moved to Limerick from Cork in 1786 to work for the Fisher Flour Mills on Francis Street.  That same year the couple built their family home, Summerville, which has since been incorporated into the grounds of Mary Immaculate College.

From a young age William showed a passion for natural history, especially sea life, which he explored while summering in Miltown Malbay. He attended a Quaker School, Ballitore School in County Kildare, where this particular line of study was encouraged. On leaving school he returned to Limerick, where he apprenticed with his father, but took no interest in the business. The upside to this work was that it provided the finance for his studies, particularly botany.

His discovery in 1831 of Hookeria laetevirens, a moss species never before recorded from Ireland, led to a life-long friendship with Sir William Hooker. At this time Hooker was at Glasgow, but was later the director of Kew. In 1832 William undertook the algal account for J.T. Mackay’s Flora Hibernica.

Following his parents deaths in quick succession, William was nominated in 1835 for the role of Colonial Treasurer in the Cape Colony, Africa. A clerical error caused the appointment to be to his elder brother, Joseph.  As the commission had been issued the government decided not to alter the mistake and both brothers travelled to South Africa. Almost immediately Joseph’s health declined and decided to turn around and face the journey back to Ireland. He passed away during the voyage home and William inheriting the original post, though he preferred to collect plants than taxes.

In office he continued his botanical work, publishing books on both British and African flora. After six years in Africa he resigned his post and returned to Dublin. In 1848 he was elected Professor of Botany of the R.D.S. In 1849 he undertook a lecture tour and collecting trip to America, where he would make his well-known ‘Key West’ collections. By delivering the Lowell lecturers at Boston, he made the acquaintance of and became friends with Asa Gray, the best known American botanist of his day, and his wife. Also in 1849, Harvey published the popular work, The Seaside Book.

In 1856 he was appointed to the chair of botany at Trinity College; he held all three of these posts until 1866. In his fruitful career he described over 750 newly discovered species of plants and in excess of 75 genera of algae. Between 1833 and 1862 he wrote over 30 papers on the subject of botany. Harvey travelled around the world, visiting South Africa, Ceylon, Australia, New Zealand, Tonga, Fiji, and Chile on his three year voyage, starting in 1835, in order to research new findings for his next publishing.

Harvey’s aptitude as a plant-collector was formidable; in Australia he collected at least 20,000 specimens, 700 in one day during his excursion of King George’s Sound. At least 100,000 specimens were added to the T.C.D. herbarium by Harvey. His book production is especially extraordinary, as not only did he collect the material, describe it and draw it, but he also engraved the lithographs. He produced an average of one lithographic plate per week from 1856 until his death, and remarkably few changes were made by Harvey between the draft and final version of his book.

William was struck by tragedy with the death of his sister, Hannah Todhunter, with whom he had lived at 19 Sir John’ s Quay, Dublin, and that of Mary Christy Harvey in 1857, the daughter of his eldest and only surviving brother Rueben.  In 1861 he married a childhood friend, Elizabeth Lecky Phelps, and the move to 4 Winton Road, Dublin. Unfortunately his physical health began to decline and the couple had no children. William died of tuberculosis in Torquay where he was buried on 15th May 1866. His brother Rueben after whom Harvey’s Quay in Limerick city is named would pass away in September that same year.

Many species of alga and one genus of higher plant, Harveya, are named after him. In his 1841 book on the seaweeds of the British Isles, William Harvey created a system for classification that is still in use today. He was highly respected in his lifetime by Charles Darwin, pair exchanged many letters and conversations during the course of their works. Though it is noted that they disagreed on the process of natural selection. William Harvey’s name lives on in Limerick, in 2014 a plaque was erected on his place of birth Summerville House by Research Office, Mary Immaculate College.