The following are the photographs of Glasgow born John Riddell who worked as a Brewer and Distiller in the Thomondgate Distilleries. In the early 1900s he took many of photographs Limerick which were developed onto glass slides, these images have been kindly shared with us by his Great Great Grandson David Ludlow. we have more of his images at 15 Never Seen Before Photographs of Limerick

1. SS Mantinea on North Side of Floating Dock

This is a very interesting image for a number of reasons, firstly it is situated on the North Side of the Floating dock from approximately this location (dock map 1900) and you can see the boats in the distance moored on the dock side. Secondly as you can see a Sail Ship with her sails down behind the SS Mantinea. Finally, the SS Mantinea was built in 1896 in Port Glasgow, she was torpedoed and sunk on the 7 August 1917 while on route from Newcastle to Genoa with coal. 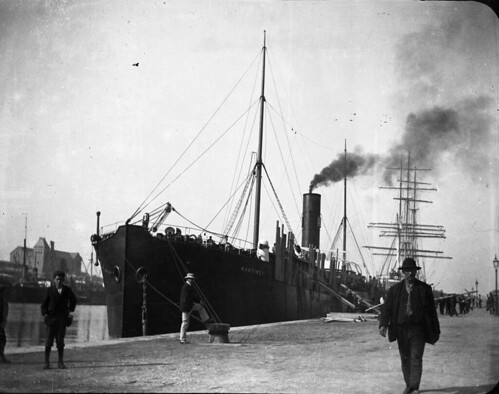 Located to the right of St. Munchin’s Church, Church of Ireland, over looking the Shannon River the following is a contemporary description of Widows Alms House as recorded in  A Topographical Dictionary of Ireland – Samuel Lewis 1837:

Mrs. Villiers’ almshouse, erected a few years ago, in pursuance of the will of Mrs. Hannah Villiers, is a handsome Gothic structure of stone, forming three sides of a square; and is an asylum for 12 Protestant or Presbyterian widows, each of whom receives £24 Irish per annum; a preference is to be given to any descendant of the testatrix who may apply for admission. 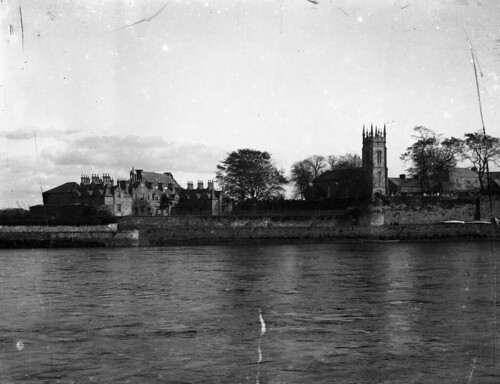 3. The houses of Castle Street

Although we often see photographs of Limerick Castle and Thomond Bridge it is unusual to see the houses of Castle Street so vividly. In 1891 there were 6 businesses recorded on Castle Street, Michael Cassidy, plumber, W. Joseph Clarke, Protestant Establishment, No.2  Sarah MacClancey, No. 3 Michael Roberts, N0. 4 Sergeant Hailes,  No.8 Mrs. Griffin, Flour Dealer. 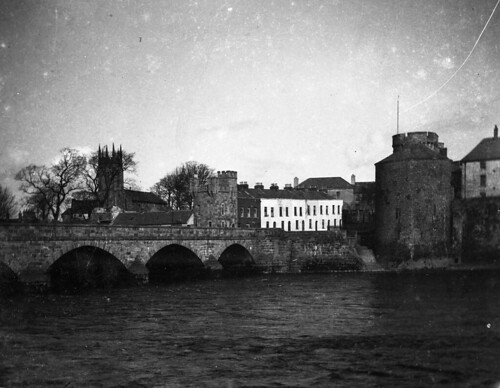 The Protestant Young Mens Association most likely erected this banner to mark the coronation of Edward VII on the 9th August 1902. The PYMA was founded in Limerick in 1853, in 1875 they moved to a permanent location 97 George Street (O’Connell Street). At this address they houses a library, lecture hall and gymnasium. You can see the interior and some of the members of the YMPA in 10 faces of Limerick’s Past. King Edward VII was the King of the United Kingdom and the British Dominions and Emperor of India from 22 January 1901 until his death 6th May 1910. 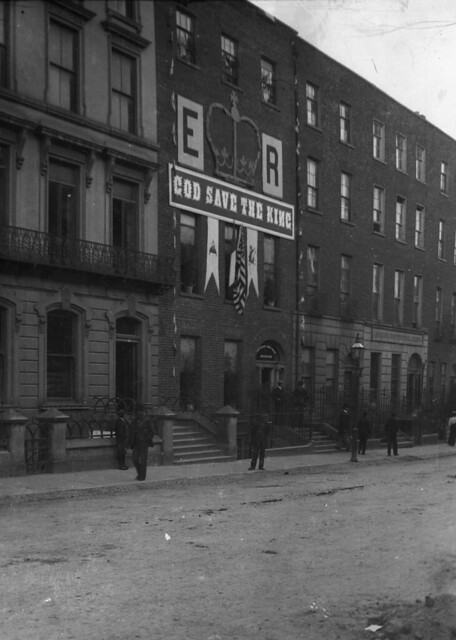 5. Castle as seen from Browns Quay

This view was from John Riddell place of work on Browns Quay. The distillery in which he worked was owned by Archibald Walker a native of Liverpool who leased the Limerick business from William Hale John Charles in 1868. In 1887 the business in Limerick was reported to be ‘probably the finest undertaking of its kind in the four kingdoms’. The business closed in the early 1920s. Archibal Walker died in Glasgow on the26 June 1880, his death was noted in the Limerick Chronicle  and the business was continued at that time by his business partner Mr. Langwell. 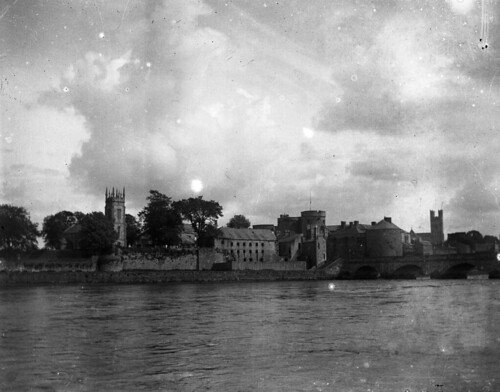 We have been experiencing extreme weather the last number of years in Limerick, but we have always had the weather and we have always had children enjoying it. This picture shows a number of children in the Thomondgate area of the city skating on a film of ice on the road. It is interesting to note the PF on the wall, was this a sign of some description or graffiti. 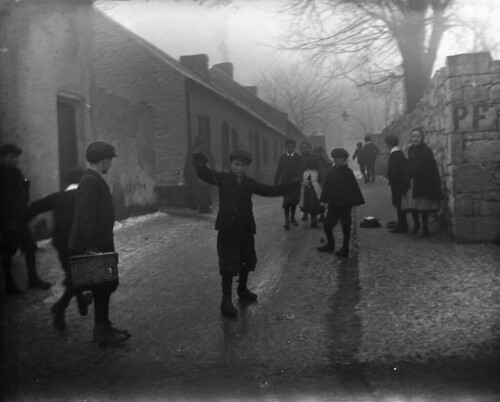 7. Picture of a Picture

123 George Street was the home to many photographers, firstly the American Studio which was in operation from at least 1899 and then Egleston Brothers from 1912. Prior to this incarnation it was occupied by Trousdell’s Ironmongers. John Riddell’s picture of a picture could be considered an early reproduction. From the holes in the door frame it seems as though many photographs had been in this spot. 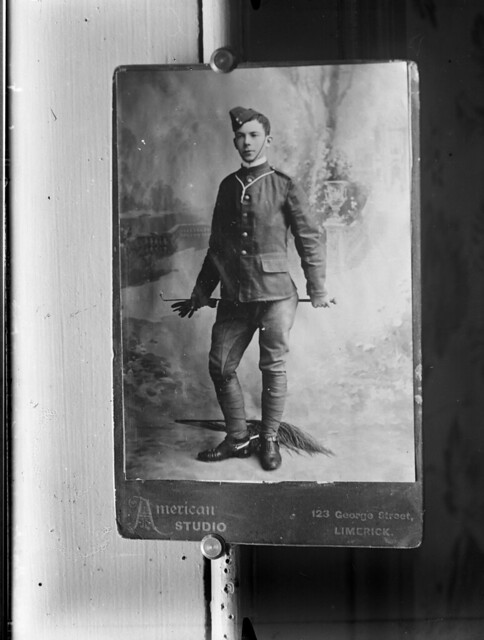 8. Duke of Connaught arrives in Limerick

The last three images in this collection all relate to Prince Arthur, Duke of Connaught’s visit to Limerick in August 1900. Prince Arthur, the seventh child of Queen Victoria visited Limerick to inspect the garrison. He arrived by train from Cork having only given one days noticed. His arrival was met with the expected pomp and ceremony, led by Thomas Henry Cleeve, (shaking the Prince’s hand in this image) of Cleeves Condensed Milk Factory . His wife Pheobe Cleeve is also on the platform. In the news reports of the time other notable attendees it was mentioned. 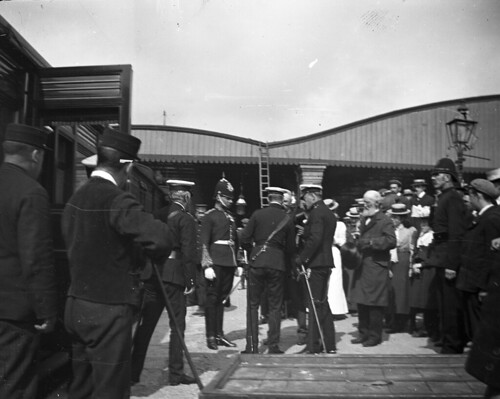 In the background of this image we see a carriage owned by the Glentworth Hotel, The Railway hotel (which is still there today), the Receiving Yard  of Mattersons & Sons as well as their chimney stack and the National Bar and grocery owned by Thomas Hayes whose business was located at 40 Nelson (Parnell) Street until at least 1918. Thomas Hayes was married to Hanney Sheehan (13 years his junior) and they had six children. 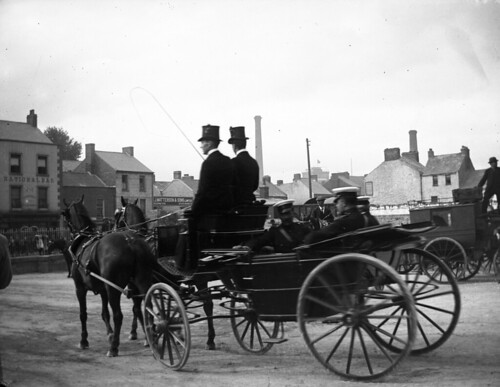 10. Limerick Lanes in the background

This final image of Prince Arthur at the railway station we can see a Liptons Tea van and the roofs of the many lanes which once stood next to the Railway Station. These lanes were located off Carey’s Road in what is now the green space to the left of the railway station. Paddy Carey a former resident of the area recalled the names of the lane in 1987 :

“King’s Lane, Young’s Lane, Richardson’s Lane, Sparling’s Lane, the Quarry Boreen, Anderson’s Court, Pump Lane, Walsh’s Lane, Punch’s Lane, Lee’s Lane, Donnelly’s Lane and Glover’s Lane.
Some of the laneways were paved with cobblestone and the houses in the laneways were small as a rule, but there were some exceptions. The houses had slated roofs, some of which had to be grouted with mortar when the rain leaked through. The houses had, for the most part, lime or cement frontages. There were, at the time, a few thatched houses left. Window shutters and half doors were in vogue then and many of these shutters were a throw-back to the War of Independence when they had been fitted to prevent the Black and Tans from shooting-up and wrecking the people’s homes.” 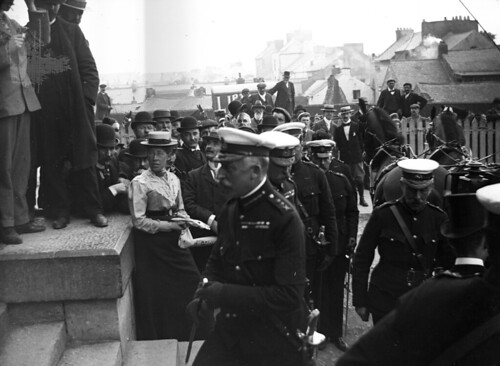