93 Salmon in one draw

The news report comes from the Leinster Express 2 July 1859

On Monday morning Daniel Farrell caught, in one draw, 93 salmon, and Savage and Mack caught, in one draw, seventy-two salmon. Later in the day, Savage and Mack, in two draws, netted two hundred and ten salmon. These fish were all prime, and averaged from 5½ to 7lbs. in weight, and were purchased for the Dublin market by Mr McDonnell, of Thomond-gate. The river has been seldom so crowded with splendid fish as it now is; but it is very strange to say there is very little sea fish of any kind in markets. The local citizens cannot get any fish except at a very high price, notwithstanding the abundance in the river – Limerick Reporter.

These fishermen used a net to catch fish on the Shannon river. If they were Stand Fishermen they would fish down river from the city use a single boat and fish down river in a draw or draft style (a belled net pulled through the water or with one man on the waters edge in a circular motion to create a bell by the shore). The Abbey Fishermen would fish up river, using two boat and a snap net between them.

It was not uncommon for fish caught in Limerick to be shipped to Dublin or London. The Strand Fishermen (who lived primarily on the North Strand, now Clancy’s Strand) and the Abbey Fishermen sent fish they caught to the London market. 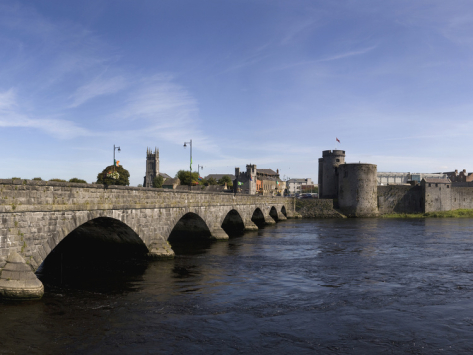 You can hear interviews with the last of the Strand Fishermen on the Limerick Archives Website.