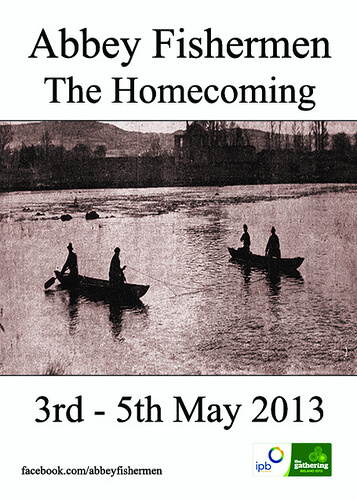 In September 2012 The Gathering held a public meeting in Adare. At this meeting I suggested holding an Abbey Fishermen Gathering, and little did I realise at the time that at the very next public meeting in Limerick City, Brenda Cosgrove and Ger Hayes would also hit on the same idea. By November, the three of us met up to discuss this project further, and so the search began for other Abbey Fishermen descendants.

A few weeks later a group of like-minded individuals met at the Pery Hotel and our committee number grew to eight with: Ger Hayes elected as chairman, Brenda Cosgrove, Marion Moloney, Marie O’Flaherty, Charlie Clancy, John Shanny, Anthony McNamara and Sharon Slater. Each of the committee members except for Sharon Slater (historian) were descendant from the Abbey Fishermen.

We held meetings each Friday on the run-up to the event and proposed many ideas, many of which were successfully pulled off and some of which turned out to not feasible. Over the course of the next few weeks we planned events, sent out invitations and I put together the program brochure. The program highlighted the list of events and also delved into brief histories, stories and poems of the Abbey Fishermen, by Frank Prendergast, Mae Clancy Leonard, Arthur Lysaght and Sharon Slater, as well as listed the last members of the Abbey Fishermen.

The committee worked together in many aspects, Marion Moloney was the main driving force behind King’s Island Community Centre, while Charlie Clancy organised a detailed map for the tour as well as the name tags and photograph placers for Sunday night. John Shanny made sure our banner was in order and that our name tags had holders, as well as bringing new information on the Shanny’s to light. Anthony McNamara took care of St. Mary’s Rugby Club. Marie O’Flaherty kept us all in check by keeping the minutes of each meeting. Brenda Cosgrove followed up emails and phone calls. Ger Hayes, as chairman, was our spokesman, making both his name and face known in the press in the run-up to the event.

On Friday night, we kicked off the Gathering at King’s Island Community Centre. We also conducted a registration of the attendees; information collected during this registration included where they travelled from, who their Abbey Fisherman ancestor was, and recorded any stories they may have had about their ancestor(s). The night was also to inform every one of the events planned for the rest of the weekend. 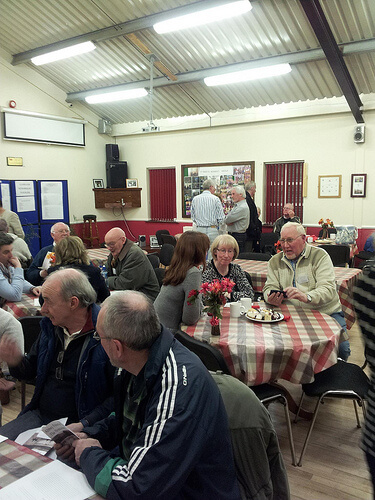 Saturday morning at 11am we had two events planned. Firstly,, the walking tour of the old Abbey Area in which most of the Abbey Fishermen and their families lived. The tour left the Absolute Hotel and wound its way through the few remaining lanes of the Abbey. Then it went up to O’Dwyer’s Bridge pointing out to the Park area where the Shanny family lived, next we entered St. Mary’s Church to view the mural which depicts the Abbey Fishermen as well as other St. Mary’s Parish well known communities. Next, stopping at St. Mary’s Band Hall before entering St. Mary’s Cathedral to look at the Shanny, Clancy and Hayes graves. 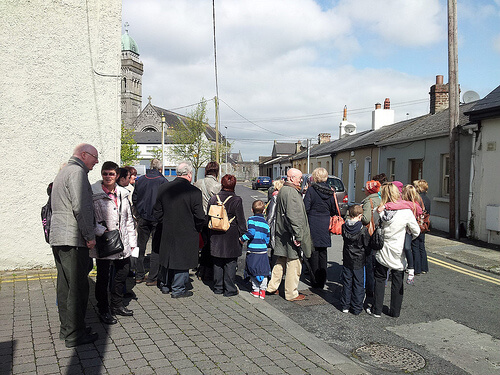 The first boat trip was due to leave from Barrington’s Hospital, George’s Quay at 11am, but due to fast current this was pushed back an hour. Over the course of the next two hours, over twenty people got to experience a trip on the Abbey and Shannon rivers up to the Hydro Electric Plant in Ardnacrusha. This was a fitting journey, as the plant in Ardnacrusha was the main reason why the Abbey Fishermen lost their rights to fish in the 1930s.

Back at the Absolute Hotel at two o’clock, Brenda Cosgrove introduced my talk on the history of the Abbey Fishermen, where I delved into the interlinking ties between the four families, as well as examining how they fished in season and out. The talk was accompanied by a slide show featuring images from prison records, as well as photographs of some men emigrating due to the loss of their livelihood. This talk was followed by a wonderful reading by Mae Clancy Leonard of her memories of her youth growing up in the Abbey area. 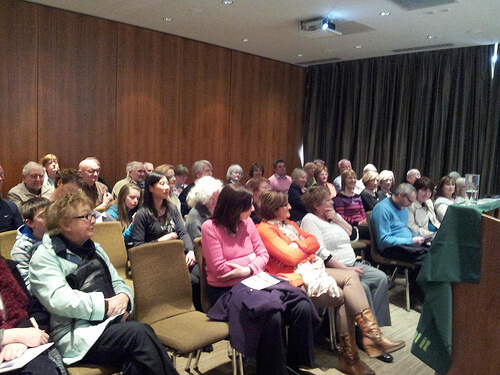 Finally, the event was wrapped up on Sunday, where there was an elaborate photograph display of the Abbey Fisherman on the walls. We tried to obtain as many photographs of the last Abbey Fishermen as we could, this had been a daunting task at the beginning of our search but ultimately proved to be very rewarding on the night itself when people were admiring photographs of their grandfathers that they never knew existed. On the big screen, throughout the night, there were slide shows of the Abbey area itself. The evening also contained a live harpist, sing-a-longs and poetry readings. 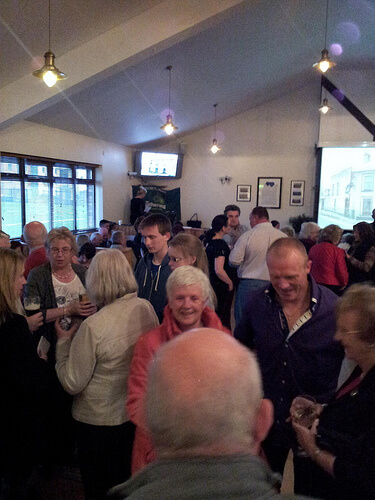 Overall, the event was a roaring success. Not only was the committee able to gather the descendants of the Abbey Fisherman from places like the United States and England, but they were also able to reunite family members who had either never met before, or had not seen each other, in some cases, in over 50 years.