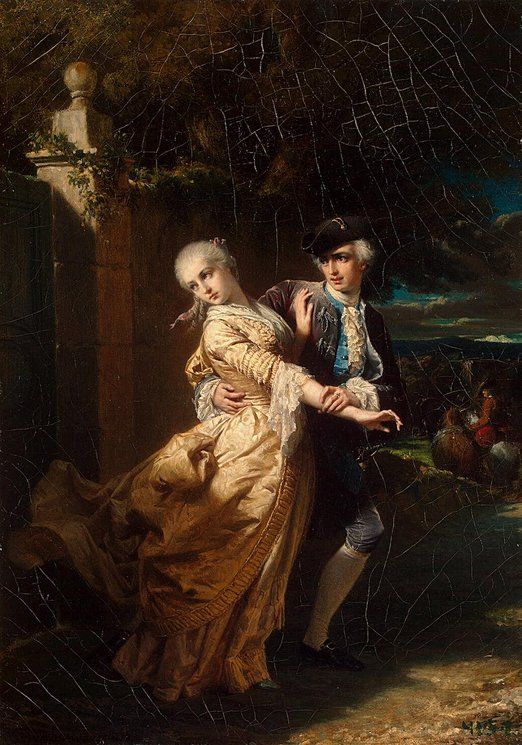 The tradition of the “abduction wedding” stretched all the way back to Brehon times. By the eighteenth and early nineteenth century, they became a common feature of life in Ireland. Between 1802 and 1816, there were 52 reports of abduction in County Tipperary alone. An abduction involved the kidnapping of a woman, who was typically well off. The abduction would lead to the loss of her reputation and she was often forced to marry her abductor. Unsurprisingly, not all of these kidnapping attempts were successful.

The Abduction of Rebecca White

Limerick was not immune to these marriages by abduction. In December 1718, the home of Rebecca White of Cappagh in County Limerick was raided by Thomas Fitzgerald of Ballyscreen, along with eighteen armed associates. Rebecca was a wealthy orphan residing in her own house on her own property. The gang abducted the young woman and took her to County Limerick where she was married to Fitzgerald by an unregistered priest.

She was then taken on a five-day journey, during which her new husband tried to keep ahead of those looking to benefit from the £200 reward offered for his capture. Although we do not know what happened to Rebecca following this ordeal it was not unlikely that she remained married to Fitzgerald, as both the civil and religious authorities regarded her marriage as legally binding. Her only other option was to bring her case to court and hope that her evidence would result in a death sentence for Fitzgerald. Very few abductees were willing to go through the interrogation of a public trial.

On 6 September 1810, Cornelius Riordan of Ballingarry was publicly hanged at the Gallows Green in the city. He was found guilty of the abduction of Mary Madigan. Following his sentencing, it was stated that he was ‘perfectly resigned and acknowledged the justice of his sentence’. In 1818, John McDonnell and his sister were tried in Limerick for abduction. The brother was found guilty while the sister was set free.

The Abduction of Hannorah Goold

In August 1822, seven Limerick men were tried for the abduction of sixteen-year-old Hanorah Goold of Aughrim, County Cork (near to Dromcolliher). One of those on trial was Maurice Leahy who was called an ‘opulent farmer’. The other men were William Doody, John Cassin, Daniel Reidy, Walter Fitzmaurice, William Costello, James, and David Leahy. After she was kidnapped from her home in the middle of the night she was taken to the house of James Leahy. The entire Leahy family whose entire family were in on the plot to have her marry John Browne. One of her captures told her that she would be wise to marry Browne as he was a “well-to-do farmer and a man of education”. Browne took the young girl into a room in the Leahy house where he raped her. The gang found a priest to marry the couple but he refuses. The gang forced the young girl to write a note saying that she was with them of her own free will. She was moved from cabin to cabin through the mountains of West Limerick for three weeks as the militia gave chase. Eventually, she was released near Abbeyfeale. It took the jury only twenty minutes to find all the defendants guilty. Five of the accused were sentenced to long terms in gaol. Costello was sentenced to death and was executed on 7 September 1822. He declared his innocence of the crime at the last moment claiming that he did not understand English so did not know what he was being convicted of. Fitzmaurice was the only one of the men who pleaded guilty and was sentenced first to death but this was later reduced to transportation to Australia for fourteen years. John Browne was never arrested, it was believed that he fled the country for America.

The Abduction of Catherine Molony

Another abduction occurred late on the Sunday night of 14 November 1847, when a number of men broke into the house of Roger Molony of Lisnamuck, Croagh. Roger Molony was a well to do farmer and sales master at Curragh Chase Wood. He was home with his wife and children on the night in question. A number of his children were asleep in their beds when suddenly a gang of men, bearing guns, entered the house. These men were later identified as Michael and Daniel Looney, Patrick Gleeson, Jeremiah Garvan, Michael Madigan, and Thomas Frawley. There was a rife between the Molony and Looney families over a plot of land occupied by Looney’s uncle Coghlan. Twelve months earlier Coghlan had been attacked and Roger Moloney’s son-in-law moved to America in suspicious circumstances. Upon entering the house, the men fired a number of shots. They then locked Roger and his son, John, into a cupboard. Roger’s daughter Catherine (known as Kate) had made her way from her bedroom to the top of the stairs after hearing the commotion downstairs. When she saw the men coming up the stairs she ran into the bed of her sister Mary.

One of the men, Michael Looney, put his arms around her and asked her name. Although it was night time she could see her assailant from light coming from a candle in the next room. She had attended school with Michael Looney about six years earlier. After she gave her name she was dragged from the bed by three or four of the men. In an attempt to free herself she grabbed the banisters on the way down the stairs, which broke under the strain.

Kate was still in her nightdress when she was taken from the house on that cold winter night. They took her as far as a hedge where Michael Looney sexually assaulted her. The gang travelled about a mile through wet boggy fields. Kate asked for some water and she was brought to the house of Jack Farrell. She was later moved to the home of Richard Creagh, where she was due to remain until a priest could be located to perform a marriage between Kate and Michael Looney.

Mrs. Creagh was a high minded woman and provided Kate with sanctuary and protection until she was returned to her distraught parents the following morning.

Several of the men were quickly apprehended at the Rathkeale Bridewell, while Michael Looney remained at large for a number of days. The case was tried in Limerick in January 1848, though the only charge was for ‘attacking and breaking the dwelling and appearing in arms’, not at all for the abduction. Strangely, Kate stated that Michael Looney had acted kindly to her and did not want to see him prosecuted. There were assertions that the abduction was a poly by Kate to marry Looney, though this was vehemently denied by Kate and her family. It was not uncommon for some of these abductions to actually be consensual due to the fact that it forced parents to consider an unsuitable son in law.

Ultimately, all six men were found guilty as charged, though an expression of leniency was issued for Michael Looney. Michael received a sentence of twelve months in prison while the other five were sentenced to be transported to Australia for a period of fourteen years. It is probable that Roger passed away before 1851 as his son John was named as head of household in the Griffiths Valuation that year in Lisnamuck. Michael Looney was also still living in Lisnamuck in 1851. We do not know what became of Kate Molony.

In 1847, there were approximately 27 cases of abduction in the country. Thankfully the practice died out following the Famine period.