World famous Shakespearean actress, Ada C. Rehan, born Delia Crehan on 22 April 1857 (though on many records she was shown as being born in 1860) in Shannon Street, Limerick. Her parents were Thomas Crehan (born in 1820), a ship carpenter and Harriet Crehan nee Ryan (born in 1822). The family were of Church Of Ireland faith in Ireland. The family relocated to Brooklyn, New York with Delia in 1864. Delia was a statuesque 5 foot 8, with grey blue eyes and dark brown hair. William Winter wrote: “Her physical beauty was of the kind that appears in portraits of women by Romney and Gainsborough—ample, opulent, and bewitching—and it was enriched by the enchantment of superb animal spirits.”

By 1870 her elder brother William (born in 1845) had followed in his fathers footsteps and was working as a ship carpenter, while her elder sisters Mary (born in 1848) and Harriet (born in 1850) was working as an actress.  While Delia and her younger brother Arthur (born in 1860) were scholars, by 1880 both Delia and Arthur would be recorded as Actors. She also had another brother, John (born in 1854). It is unsurprising that Delia followed her sisters into acting as by 1870 Mary’s husband, Oliver Byron, was also an actor and living in the Crehan household in Brooklyn in 1870.

It was her brother‐in‐law, Oliver Doud Byron, who helped her make her debut in 1873 as Clara in Across the Continent. Rehan then joined Mrs. Drew’s celebrated ensemble at the Arch Street Theatre. It was during this period that the typographical error dropped the first letter of her surname, Crehan, giving her the stage name that she would be known as Ada C. Rehan. 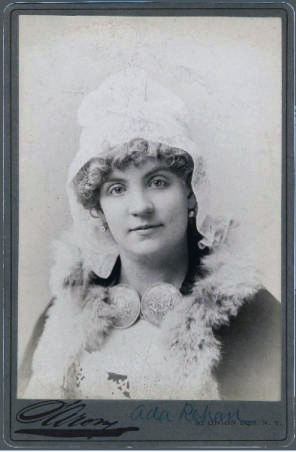 She spent two seasons with Drew before being spotted by John Augustin Daly, an American Playwright and Theatre Manager. Daly was so impressed with her performance in 1879 as Mary Standish in his plays Pique and L’Assommoir, that he asked her to join his company in New York. Her first performance with Daly was as Nelly Beers in Love’s Young Dream and under his guidance Rehan quickly became the finest and probably the most beloved of all younger comediennes.

She was living with her parents and brothers William and Arthur in New York in 1880. Their name was spelled Creghen according to the records of the time.

Regan excelled at classic comedy, including such Shakespearean roles as Mrs. Ford, Katherine, Helena, Rosalind, Viola, and Beatrice and Sheridan’s Lady Teazle. But she was also at home in the newer comedies Daly presented, among them the American premiers of Pinero’s The Magistrate (1885) and Dandy Dick (1887), in which she played Mrs. Posket and Georgiana Tidman respectively.

William Winter was quoted as saying, “Her acting, if closely scrutinized, was seen to have been studied; yet it always seemed spontaneous; her handsome, ingenuous, winning countenance informed it with sympathy, while her voice—copious, tender, and wonderfully musical—filled it with emotion, speaking always from the heart.”

Miss Rehan was the model for a solid silver statue of Justice that was presented as part of the State of Montana’s mining exhibition at the World’s Columbian Exposition in Chicago in 1893.

After applying for a passport in 1894 for the purpose of “travelling on the Continent”, Ada Rehan was widely admired in Europe, having acted in Paris, Berlin, Hamburg, London, Edinburgh, Dublin, and Stratford-on-Avon.

Following the death of her mentor, manager and director, John Augustin Daly, in 1899, Ada would slowly drift from public appearances until she officially left the stage in 1906 and made New York City her home until her death there in 1916. She is buried in Green-wood Cemetery, Brooklyn, New York. Her funeral arrangements were announced in the New York Times. Even though she had left Limerick’s shore more than 50 years previously she was still remembered in an obituary from the Limerick Chronicle, 11 January 1916.

She was written about in the following: Ada Rehan: A Study by William Winter (a private print for A. Daly, 1898) and Ten Weeks with Ada Rehan by Lark Taylor (1916).

More than 25 years after she died, a WWII liberty ship was named after her, the USS Ada Rehan.