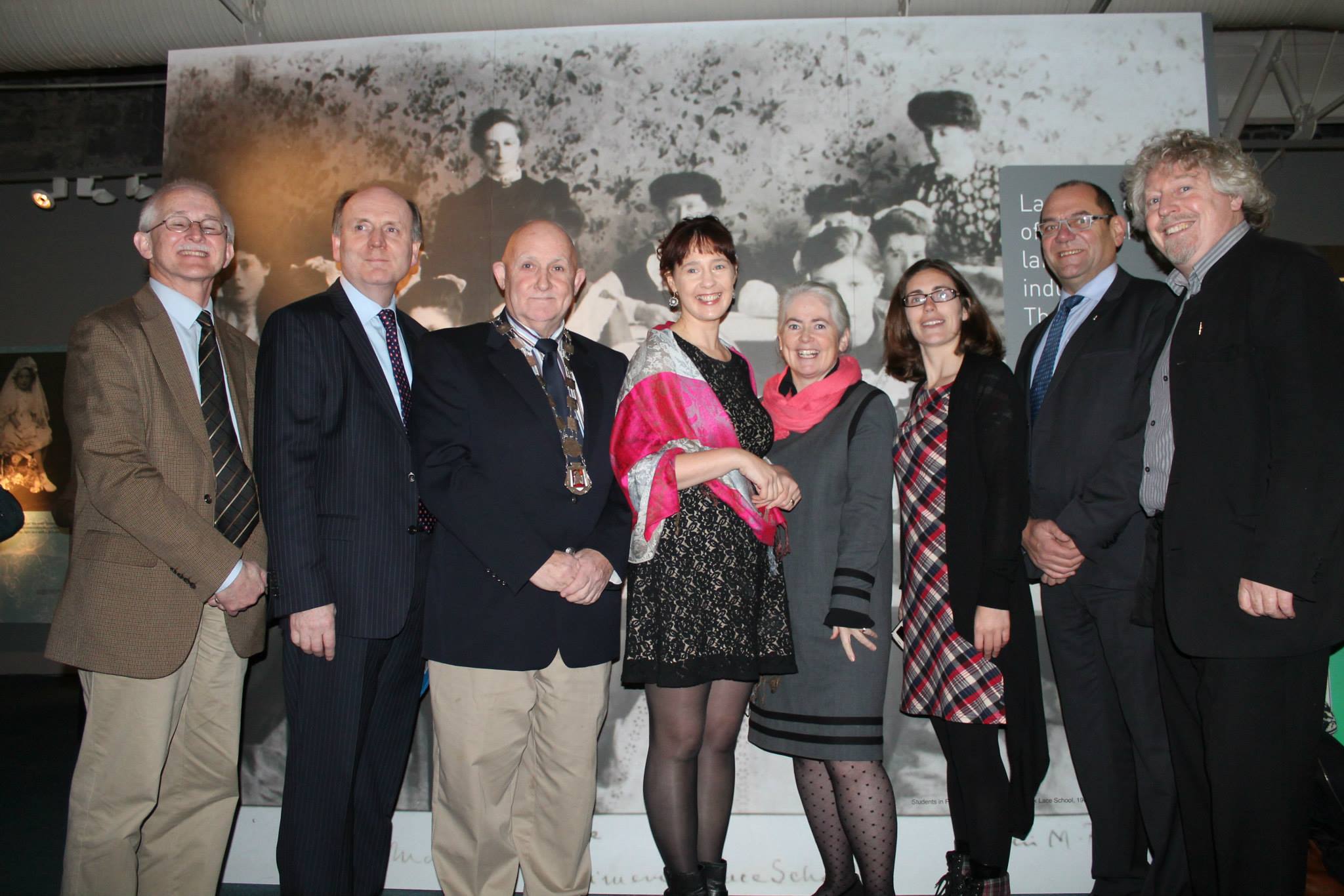 Researched and written by Dr. Matthew Potter and edited by Jacqui Hayes, both of Limerick Museum and Archives, ‘Amazing Lace, A History of the Limerick Lace Industry‘ documents how Limerick lace manufacturing emerged as the largest in the history of Irish lace and one of the largest industries of any kind to operate in Limerick over the past two centuries.

At its peak in the early 1850s, an estimated 1,800 people were employed in Limerick City making lace. Over many decades, it produced a large output of lace products, from dresses, christening shawls and ecclesiastical robes to handkerchiefs and doilies.

“Limerick lace was one of the greatest craft industries in Irish history and one of the most famous and beautiful laces in the world,” explained Dr. Matthew Potter

Commenting on the background to the new book, Dr. Potter said: “The book was compiled using newspaper accounts of Limerick lace, including working conditions, adverts and accounts of where it was sold, as well as contemporary accounts by visitors to Limerick, trade directories listing lace manufacturers in Limerick at different dates, the private papers of manufacturers Florence Vere O’Brien and Maude Kearney, and Census returns. Many of the images featured in the book come from our own collection in Limerick Museum and Archives, plus the private collections of Florence Vere O’Brien and Maude Kearney, the Metropolitan Museum of Art, New York, the Victoria and Albert Museum in London and the National Archives of the United States.” These images were sourced by Sharon Slater.

Limerick Archivist and Editor of the Book, Jacqui Hayes stated that the social history of Limerick was altered by the lace industry.

“Limerick lace provided employment to a significant proportion of the female workforce, who in turn supported or helped to support a large number of dependent relatives. In 1851, it was estimated that each lace worker maintained two or three other family members,” she outlined.

Ms. Hayes noted that the significance of Limerick lace as perhaps the city’s leading brand name has resulted in its usage in a number of contexts.

During the 1920s and 1930s, one of the most famous horses in the world was the celebrated show jumper ‘Limerick Lace’ ridden by Major Ged O’Dwyer, of Bruff, County Limerick. Limerick Lace was worn by thousands of women, including a few who figure prominently in the pages of history, such as Queen Victoria, American First Lady Edith Roosevelt and Countess Markievicz. Generations of churchmen also wore Limerick lace and used lace to decorate their churches, in Ireland and throughout the Irish Diaspora.

In 2014, Limerick composer Bill Whelan marked his native city’s designation as the first national City of Culture by writing a flute concerto for Belfast flautist Sir James Galway entitled ‘Linen and Lace’ in honour of the major textile industries associated with their respective native cities.

“Whelan’s naming of his piece demonstrated how deep were the roots that Walker’s 1829 foundation had put down in Limerick and that even after 185 years, Limerick lace still continued to be closely associated with the city,” explained Ms. Hayes.

‘Amazing Lace, A History of the Limerick Lace Industry‘, a lavishly illustrated book about one of the most famous chapters in the history of Limerick, is available in O’Mahony’s Bookshop, O’Connell Street, Limerick. The book launch takes place in Limerick City and County Council, Merchants Quay, Limerick tomorrow (Wednesday, 10 December, 2014) at 6.30 pm.

The Limerick lace industry was established in 1829 when Charles Walker, an English businessman selected a premises in Mount Kennett, Limerick city as the location for a lace factory. Limerick lace was produced mainly in factories for the first forty years of its existence. Between the 1830s and 1860s, several lace factories operated in Limerick, mainly in Clare Street and Glentworth Street. It was also made in Cannock’s and Todd’s department stores. In the 1840s, Limerick lace making was introduced to a number of convents and convent-run institutions, both in Limerick and elsewhere. In 1850, lace making was introduced to the Good Shepherd Convent on Clare Street Limerick, but it was also made in other religious houses based in the city, including the Presentation Convent in Sexton Street and the Mercy Convent at Mount Saint Vincent, on O’Connell Avenue. Limerick lace was disseminated widely throughout Ireland by Catholic religious sisters anxious to provide employment at the time of the Famine. They introduced it to several other convents including religious houses in Youghal, Kinsale, Dunmore East, Cahirciveen, and Kenmare.

In the 1860s, the spread of machine made lace from Nottingham brought about the collapse of large scale factory-based lace making in Limerickand many of the lace makers lost in their jobs. In the 1880s, Limerick lace underwent a significant revival due to the activities of Florence Vere O’Brien, an English lady who married into the O’Brien family of Dromoland Castle. She began to employ several former factory workers to make lace for her in their own homes, which she then sold. In 1893, she established a Limerick lace school in George’s (now O’Connell) Street which taught skills, provided workrooms and was used as depots where the lace was sold. After their training was completed, the former pupils usually became lace workers, working at home and using the school as their depot.

In 1904, Mrs Maude Kearney, a daughter of James Hodkinson, founder of the famous firm of specialists in church decoration in Henry Street, Limerick, established a lace making business which she called the Thomond Lace Industry. Based in Thomondgate, Thomond Lace employed between fifty and eighty workers at the height of its success. After the Second World War Limerick lace declined rapidly but the tradition is still continued by a number of individual lace makers and lace classes.