Ambrose Hall and the Sarsfield Statue 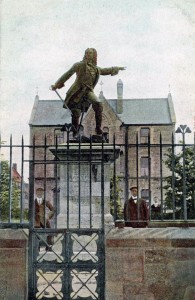 From 1845 onward there were several proposals for the erection of a monument to Patrick Sarsfield in Limerick.

A Limerick artist Henry O’Shea drew up the initial Sarsfield Statue sketch, this was then designed by John Lawlor of Dublin, who had an eye for the finer details of Sarsfields 17th century uniform. The statue was cast bronze at the Young’s London Art Foundry.

The Corporation debates from May – December 1881 on the erection of the Sarsfield Statue that Ambrose Hall who was the instigator in the erection wanted it to be located in Pery Square, he was out voted 12 to 5 by councillors who wanted it in Bank Place. The debate was brought to the public’s attention with many reports both for and against Hall’s proposed site recorded in the local press.

After much contention Hall selected the site independently in the grounds of St. John’s Cathedral and after discussions with the Bishop placed the statue there. There was no unveiling ceremony of the statue.

Ambrose Hall died in 1908, he is also noted for his faux-church ruin in Mount Saint Lawrence Cemetery. He was also the Mayor who took the council to court to become elected. His son William Jeremiah Hall was an architect who died on 21 May 1890 of typhoid fever, contracted while engaged in superintending the rebuilding of the wall of the Limerick Floating Dock.

Engraved to front of the plinth on which the statue stands: