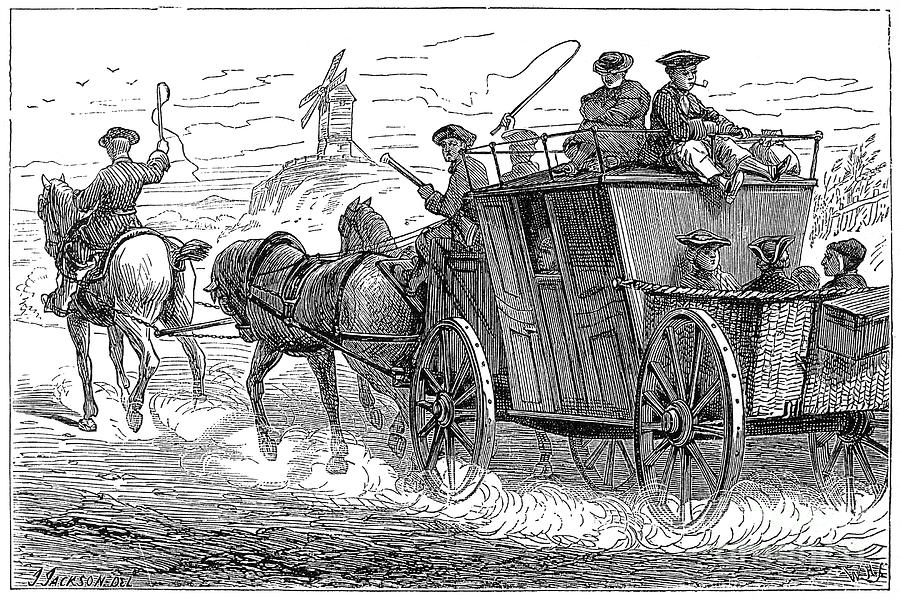 The Chronicle was there to record the early days of the stagecoach. It told of the trials and tribulations of Andrew Buchanan of Thomondgate, who in 1784, first regularised road transport and ran his stagecoaches on the perilous Dublin-Limerick route.

The distinction of pioneering the first regular stagecoach service in Ireland should go perhaps, a Thomondgate man, Andrew Buchanan. Many years before the great transport genius, Charles Bianconi, was born Buchanan’s coach plied the perilous Limerick-Dublin route regularly and punctually, braving danger from the elements and from the highwaymen. Accustomed as we are to a complex and efficient transport system, we may find it difficult to believe that before Buchanan’s day there was no public mode of conveyance in Ireland. Roads were few and badly made. The rocky road to Dublin was not then a comic song: it was a perilous reality. In the interest of self-preservation, travellers banded together and relied on their marksmanship or swordsmanship to protect them from the plundering highwaymen.

Buchanan’s stagecoach appropriately named ‘The Fly’ blazed the dangerous Limerick-Dublin route with the first regular service in 1760. Prior to that time, intending passengers met at a coffee room in Quay Lane, and on a particular day being selected to leave, a notice was displayed over a mantelpiece and signed by all the passengers. The journey took as long as five days, and the same horses were used throughout.

Buchanan decided to improve on this slow and irregular transport, and set up his headquarters at a place called the Head Inn in Gerald Griffin Street. This was a fashionable hotel in its day and had as its patrons the actor Sarah Siddons and other stage personalities who visited the Playhouse, which was established off Gerald Griffin Street in 1770.

‘The Fly’ was a picturesque sight as it passed through Saint John’s Square, through Irishtown, across Baal’s Bridge, through Englishtown, across Thomond Bridge to Killaloe and negotiating part of Keeper Kill on its long route to Dublin.

‘The Fly’ completed the journey punctually in four days. This gave travellers an extra day in the Dublin. An even greater improvement was effected a short time after by using a lighter built coach and having relays of ready-harnessed horses at appointed halts. These and other improvements enabled the journey to be made in three days by a coach called ‘The  Balloon’ and the driver was a very proud man indeed to have covered so great a distance in what was then considered so short a time.

Twenty years elapsed before any further changes of note took place, and it was not until 1790 that an analysis of performance of ‘The Fly’ and ‘The Balloon’ that resulted in further alterations and improvements.

Among these, the route was changed and the road newly constructed. Instead of going across Thomond Bridge and by Killaloe, the coach proceeded by Clare Street and direct to Nenagh. This route was responsible for reducing the Limerick-Dublin journey to two days. It was ultimately completed in one day, but this necessitated a cock-crow start and a late arrival. It was certainly no mean achievement when we consider that the roads were very few and badly engineered. In their planning, no care was taken to avoid hills or cut through them. Also, they were so indifferently constructed and so badly cared for that in bad weather long stretches were impassable.

Buchanan’s first coach had a hard job to do, and consequently it was very large and heavy in its construction. The horses, too, were harnessed after the same style and many unnecessary straps and buckles were used which were afterwards dispensed with.

Busily grinding through the muddy roads, Buchanan’s wagon wheels turned mileage into money. Then the competitors came and his skies darkened – for a while. The Chronicle wrote in 1784 an account of the war of the wagons.

1784 was a particularly trying year for Buchanan when a company Messrs. Foster and Osborne, with headquarters in Dublin, decided to exploit the profitable Limerick-Dublin route. The following announcement and rates of carriage, published on March 25, 1784, surely caused his sword to rattle in his scabbard:

“A compleat new covered Broad-Wheel Stage Waggon, erected from the best English model for the carriage of Goods and Passengers from Dublin to Limerick in five days, sets off from the Proprietors, No. 31 Mary’s Abbey, Dublin, every second Thursday. Orders received at their office as above; at Mr Andrew Watson’s Limerick; Mr Barry Smith, Nenagh and Mr Reynolds in Roscrea. The Public may depend on the strictest integrity and attention from the Proprietors one of whom will attend on the road constantly.

Small Packages or Parcels, under 56 lb., One half penny per lb.

Passengers with 14 lbs. Luggage through all or any part of the road, on penny per mile.

It will arrive in Limerick the first time on Wednesday, the 24th inst.”

However, then as now, labour jealousies had to be overcome. Maybe the trouble was fomented by Buchanan, who was a keen businessman. The truculent-carman were aroused to action, and the Dublin company found it necessary to issue the following assurance on March 29, shrewdly including in it an advertisement for  a partner who would reside in the enemy camp:

“It has been conjectured that the Limerick Stage Waggon would meet with opposition from the Carmen or mob, the Proprietors think it necessary to acquaint the Publick that there is a Bill now going through Parliament and will immediately pass into Law, which effectively secures said Waggon and all goods contained therein, to the Owners, and for Punishing all persons attempting to impede the same; also to regulate the Tolls at the Turn Pike Gates in this Kingdom. The Proprietors, wishing to render this undertaking as extensively as possible, will have another Waggon erected shortly; and wants a Resident Partner in Limerick, immediately. Apply to the Printer, hereof, or by letter to Messrs. Fosters Osbourne and Co., No. 31 Mary’s Abbey.”

This advertisement resulted in a Mr Meredith being taken into partnership, and the moved to Limerick with his family:

“The Proprietors of the Stage Waggon beg leave to acquaint the Public that they have taken a Commodious Concern at the Square, with convenient stabling, stores, etc., for to carry on their business; and that they have taken into Partnership Mr Meredith, who with his family now resides there. All orders will be thankfully received by him, and the Goods sent for and delivered. Passengers may depend on the Waggon going into Dublin the morning of the Sixth Day, Limerick, May 24, 1784.”

Buchanan countered this, seven weeks later, with the following reminder:

“Henry Buchanan begs leave to inform the Publick that he has an excellent Coach and two Post Chaises; and having got an additional number of stout horses, will be ready at the shortest notice to set out for any part of the Kingdom. As his drivers are remarkable for Sobriety, and his Prices are moderate, he hopes to merit the Countenance of the Publick.”

A smaller company in Thomondgate also had designs on the “countenance of the publick”:

“A Post Chaise with Able Horses, Will set out for Dublin any time agreeable to Passengers between this day and next Thursday. Apply to John Halloran, Thomondgate, July 22, 1784.”

When stagecoaches were first established, the mails were conveyed from Limerick to Dublin three times a week. They were carried in saddlebags placed at each side of a horse, which was ridden by a courier, who travelled a fixed distance, usually ten miles. A fresh man and horse then took over, and they were so relayed until they reached their destination.

Occasionally these couriers were relieved of their saddlebags by highwaymen, who was not by any means the colourful gallant characters which Hollywood would have us believe. A postilion (one who rides or guides the first pair of horses of a coach or post chaise would occasionally not turn up to work. The employee of one of these men saw red when he posted this notice:

“I caution the publick against hiring Jeremiah Cusack (Postilion) having run away from my service on Saturday, 31st of July last, without any provocation whatever. Limerick, 2nd August, 1784. – C. Powell.”

All was fair then in the stagecoach war, and if passengers could, by foul means, be induced to patronise Messrs Foster and Osbourne nobody really worried, except perhaps Andrew Buchanan:

“Whereas a Report has been injuriously propagated that Limerick Stage Coach was stopped on Friday last by Four Foot Pads, and one of the Passengers robbed of Three Guineas; the Proprietor of the said Coach thinks it necessary to inform the publick that the said Report is without foundation and calculated to injure him in the Estimation of the Publick, to whom he holds himself highly indebted for the preference given to his Carriages; he further begs leave to observe the neither on that day nor at any other time since his Commencement, have the Passengers in the Limerick Stage met with the least Accident, either from robbers or otherwise, as can be proved by affidavit, Sept 15, 1784.”

However, Buchanan winning the battle of 1784, and Benjamin Meredith, partner in the firm of Messrs. Foster and Osborne, found the going not at all to his liking:

“Whereas a Partnership was entered into in the month of May last between William Osborne, Francis Foster, Robert M Murray, all of the City of Dublin, Gentlemen and Benjamin Meredith, then of Kilboy, in the Co. of Tipperary, Gent., to Convey Merchants, Goods and other Articles, by Land Carriages from said City of Dublin to the City of Limerick and other parts of the Kingdom of Ireland. Now I, the said Benjamin Meredith, one of the said partners, do hereby give notice that I have withdrawn myself from the said Partnership and that the same has lately been dissolved with respect to me and therefore caution the Publick not to accept of any Bills or Notes or to give any Credit on account of said Partnership upon my own credit, as I have withdrawn my name therefrom, and there in. Dated this 25th day of October, 1784.”

“To be sold by Edward Gubbins, Coachmaker, outside the Square, Limerick, the remarkable large New Waggon, which lately ran from Dublin to this city; it would answer well for drawing turf, corn, etc., and will save the purchaser in the Carriage of such articles 16 or 18 horses a day. Likewise complete, harness for 8 horses. It will be sold for less than half the original cost – Nov. 1, 1784.”

And so, these competitors in transport slipped, like a sodden bus ticket, down history’s drainpipe. Buchanan’s coach continued through his son Henry Buchanan into the early nineteenth century.