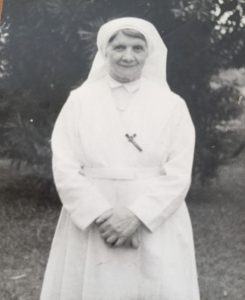 Mary Angela Fitzgerald had a tough life by most measures, but nonetheless, it was a life fully lived in the caring and serving of others. Despite enormous hardship, her generosity of spirit was learned early in her life. Angela, as she was called, was the eldest daughter and was born in 1890, in Galbally, County Limerick, Ireland.

When aged only 10 years, her beloved father Walter J., a National School Teacher, died of typhoid fever, age 35, at the Workhouse, Mitchelstown on the 15th October 1900. Her widowed mother Julia Fitzgerald (nee O’Flynn), aged 37, became solely dependent on her own National School Teachers wage and was fully stretched rearing her four daughters and three sons. Tragedy struck once more, when just over four years later, Angela’s mother, age 42, died of pneumonia at her home in Galbally, on the 8th February 1905.

Founded by Père Nicolas Barré in Paris in 1662, The Infant Jesus Sisters came to Ireland from France. The shortage of English teachers forced the Sisters to turn to the British Isles in hopes of recruiting and training potential missionary teachers. In 1909, Mother St Beatrice Foley, returned from Singapore, and established Drishane Convent in Millstreet, County Cork, Ireland. It had a “knitting school” for younger girls and was also used to train teachers for the Asian missions. Less than half a decade after opening, the convent was sending teachers and Sisters to British Malaya, and Japan.

Like her father and mother and grandfather before her, Angela qualified as a National School Teacher, aged 20. Later she became one of the early novitiates to join Drishane Convent. By 1919 she had taken her holy vows having being professed Sister Enda and was sent to the missions in Yokohama, some 30kms south of Tokyo, Japan.

She became a renowned teacher of English and piano. With her fellow Sisters, she helped set up and build educational facilities, schools and places of learning for the poor and in particular for girls.

Angela would spend her lifetime serving the people of Yokohama and would not see her family for another 27 years, visiting in March 1946, and only thereafter post Vatican II, December 1965, when she returned to visit Ireland in 1973. In that time, much joy and notable hardship was to come her way. Yet her unbending faith kept her going through all that was to unfold.

By 1919, Angela and her fellow Infant Jesus Sisters, had continued to build upon the work of their fellow Sisters, which included a fine well-built bricked Catholic Church and School at St Maur’s. It was and remains, the first and oldest International School in Japan, established by them in 1872.

While attending 11am morning mass and at the exact moment of receiving the host and sacrament of Holy Communion from the priest, Japan’s largest ever earthquake struck the city of Yokohama. The roof of the church caved in and the priest with all of his 234 congregants died.

It was the 1st September 1923. 140,000 people perished as a result of that dreadful 7.9 earthquake. 90% of all homes were damaged or destroyed throughout Yokohama that day.

It was an enormous task for the authorities, the businesses and the hundreds of thousands of homeless people to tackle. Much strife, jealousies and violence followed.

Sister Angela and her fellow Sisters sought international help and set about providing as much assistance as they could to those devastated by the earthquake and the resultant twelve metre tsunami. Rebuild they somehow did. By the early 1930’s St Maur’s had re-established its school and church buildings and was well recognised as an International centre of learning.

The Future Empress of Japan:

In 1938, Sister Angela was summoned by one of the city’s well known and respected businessmen, Hidesaburō Shōda, who was the president and honorary chairman of Nisshin Flour Milling Company. He and his wife Fumiko Soejima commissioned her to teach their young five-year-old daughter, modern English. The young girl’s name was Michiko.

Sister Angela’s only connection to Ireland was through writing letters and receiving much looked forward to, mail from Ireland and home. Her favourite nephews and nieces were her younger brother Innocent’s children Brian, Betty and Bunny. Sister Angela would teach the young Michiko English and how to become pen-pals with the three Fitzgerald’s who spent their annual summer holidays in Ballybunnion, County Kerry, Ireland. The following ditty would be recited out loud for Michiko by Sister Angela, and with the required proper English pronunciation;

‘Brian, Betty and Bunny on the beach of Ballybunnion now repeat after me’

‘Brian, Betty and Bunny on the beach of Ballybunnion and repeat after me’

In August 1957, she met then Crown Prince Akihito on a tennis court at Karuizawa near Nagano. At that time, the media presented their encounter as a real “fairy tale”, or the “romance of the tennis court”. The engagement ceremony took place on 14 January 1959. The wedding took place as a traditional Shinto ceremony on 10 April 1959. The wedding procession was followed in the streets of Tokyo by more than 500,000 people spread over an 8.8 km route, while parts of the wedding were televised, thus making it the first imperial wedding to be made available for public viewership in Japan, drawing about 15 million viewers.

Empress Michiko is a known Hibernophile with an interest in the Children of Lir and recites ‘I See His Blood Upon The Rose’ by Joseph Plunkett as a party piece, and even speaks passable Irish.

Sister Angela by now was based at their convent in Fukuoka, until October 3rd 1942. On that ill-fated day, she as a holder of a British passport, was taken from her home and religious community and landed in an internment camp where members of other religious congregations were already imprisoned. That same year on Christmas Day 1942, they were removed to one of their schools outside Tokyo, a much larger number of internees were there. In late 1943, they were again moved, this time to a Franciscan Monastery and then finally to the Archbishops House in Tokyo, where they remained until their release.

During World War 2, from January 1944 until August 1945, the U.S. dropped 157,000 tons of bombs on Japanese cities, according to the U.S. Strategic Bombing Survey. Fifteen million of the 72 million Japanese were left homeless.

‘The Irish department of External Affairs has been notified in response to representations to the Japanese authorities that arrangements have been made for the release from internment of 13 nuns who hold British passports and for the supply to them of identity cards indicating that they are Irish citizens. The nuns, who are members of the Sisters of the Infant Jesus order, Drishane Convent Millstreet Co. Cork are: Sister Francis Xavier (Catherine Teresa MacSwiney, sister of Terence Mac Swiney); Sister Peter (Catherine O’Mahony); Sister Enda (Mary Angela Fitzgerald) dated: 13th November 1944’.

On the 6th November 1944, Sister Angela and her fellow Sisters of Sr. Maur, had been released together, along with the other religious orders. Two or three others were kept until the end of the war. Sister Angela was now sent to Shizuoka, her former charge was given to a Japanese Sister. She stayed there until the month of June. They were bombarded on the night of the 20th June 1945. Fleeing into the countryside they were way-laid with the American forces blanket bombing campaign, including their use of incendiary napalm bombs. No lives were lost. The convent and schools were reduced to rubble, not only at Shizuoka but also in Tokyo and St Maur’s at Yokohama. The convent in Fukuoka was spared.

Once again, the church and buildings of St Maur were flattened to rubble. As they ran for their lives with the school children in tow, Sister Angela in her understandable fear ran out of her only pair of shoes. They lived for many days in the relative safety of the rural hill areas. The diminutive, Sister Angela writing back to her brother Willie and sister Nora in Ireland, spoke of the devastation. The Red Cross were out of many supplies and so she humbly wrote home requesting her sister Nora to send by post, a pair of simple, size four, one-inch rubber heeled shoes to her, as she no longer had any to wear.

The school did not reopen for a number of years after the war but recommenced in the late 1940’s and once again within 20 years had established the school and church of St Maur, as an exemplary International School of learning, which it is to this day.

Empress of Japan on State Visit to Ireland 2005:

On the 7th September 2005, Emperor Akihito and his wife Empress Michiko, paid a state visit to Ireland. Empress Michiko, in an interview given before they travelled, said she had been taught by Irish nuns and recalled “the charm and loveliness of each one of them”.

Betty Fitzgerald, now married and residing in Tullamore, Ireland, known as Betty Egan, read this article in the Irish Times newspaper. She lifted the phone to the Japanese Embassy in Dublin and requested to speak to the Japanese first secretary. She relayed her story of whom had and how was the Empress educated. She mentioned the ditty ‘Brian, Betty and Bunny on the beach of Ballybunnion now repeat after me’, and passed on her very best wishes to her former pen pal on her visit to Ireland.

Within 60 minutes the excited first secretary had phoned Betty Fitzgerald back. He conveyed the Empress’ delight on hearing from her and wished to convey her memory of ‘Brian, Betty and Bunny on the beach of Ballybunnion now repeat after me’, as being as clear as a bell, as if it was only yesterday.

Betty Fitzgerald had in her own way, reconnected two remarkable women and, she gently put the phone down and was indeed satisfied.

Sister Angela Fitzgerald died on the 26th July 1980 and is buried in the Infant Jesus community cemetery in Yokohama, Japan. She died in her ninetieth year.

Empress Michiko turns 83 on the 20th October and next month, in August 2017, she celebrates 60 years since she first met her future husband, that fateful day on the tennis court at Karuizawa.

About the author: Maurice Egan is a son of Betty Egan (Fitzgerald) and a grand nephew of Sister Angela Fitzgerald. He resides with his family in Johannesburg, South Africa. He too was fortunate enough to first meet Sister Angela and where you may ask? No less than with his mother and uncles, Brian, Betty and Bunny on the beach at Ballybunnion, in 1973.