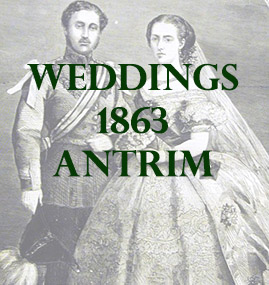 In Belfast, Howard M Ferrars, Esq., to Charlotte Amelia, daughter of the late John George Stewart, Esq., of the county Down

In the Presbyterian Church of Connor, Joseph Taggart Esq., Antrim to Ellen, daughter of Wm Taggart, Esq of Thornhill, Belfast