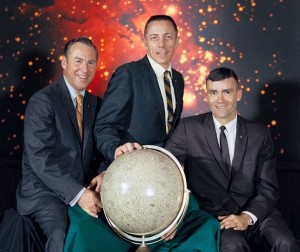 Apollo 13 launched on the 11 April 1970 at 7:13 o’clock in the evening with flight crew James A. Lovell, John L. Swigert and Fred W. Haise. Lovell was the Commander of the space flight, he had previously flown to the moon on board Apollo 8. Swigert was the Command Module Pilot and had been a member of the backup crew until the week before Apollo 13 took off. While Haise was the Lunar Module Pilot and was due to be the sixth person on the moon before disaster struck Apollo 13.

This was the third lunar landing attempt by NASA, and although the mission failed to reach its destination, it was deemed a “successful failure” as the crew were safely returned to earth. The real success was making it home at all, as a series of issues, including a rupture of service module oxygen tank, left them in peril in space, which resulted in the now famous quote “Houston, we have a problem…”

On Thursday October 15, 1970, all three of the Apollo 13 astronauts, Lovell, Haise and Swigert, arrived in Limerick city on the last leg of their European tour. The day before the three landed in Shannon Airport, and later spent the night in Dromoland Castle.

The space men arrived in Limerick from Dromoland at 11.15am. They traveled by motorcade via Ennis Road, O’Connell Street, the Crescent and Barrington Street and concluded their procession on  Pery Square. They were met at then City Library, now Limerick Gallery of Art, in Pery Square, by Mayor Clr. J.P. Liddy and were treated to a civic reception.

The day before their arrival, the Mayor of Limerick, Councillor J. P. Liddy, appealed to all the schools in the city to allow the students time off in the morning to welcome the astronauts to Limerick. Although this was a thoughtful idea, the amount of students who arrived at the City Library proved difficult for security at the event. The Leader of October 17, 1970 reported that the crowds were so large that “it was with some difficulty that the three astronauts… two of whom were accompanied by their wives – made their way inside as Gardai battled with over enthusiastic school goers who sought their autographs.”

That being said, at least one of the students in attendance received more than just an autograph. Fifteen year old Brian English, “a student at St Munchin’s College, who this year was the best boy in the Aer Lingus sponsored Young Scientist of the Year competition”, got to chat with the astronauts for several minutes.

In his welcome Mayor Liddy spoke of how rubella almost stopped the Apollo 13 flight before it started.  Swigert was part of the baking crew when it was discovered that the prime crew command module pilot was at risk of contracting rubella from another member of the backup crew so his flight into space came sooner than expected. He went on to mention the trouble the astronauts faced in space:-

“Few of us, indeed, will ever forget the tense drama in which we became personally involved, as we followed your flight for survival through all its stages, on our television screens, All the destructive forces of nature combined to create a nightmare situation to which no human beings had ever before been exposed.

While we must pay the highest tribute to the American technologies and scientists at Houston and other stations, who strove against overwhelming odds to bring the crippled space ship back to earth, their best efforts would have been in vain but for the courage, resourcefulness and steadfastness of spirit which the three of you displayed.

For one brief spell, men and women of every race, colour and creed across the face of the earth, were united in spirit as they watched, waited and prayed for your safe return. And the expressing of joy and relief at Mission Control when Odyssey eventually splashed down in the Pacific were echoed in a million-fold here in Ireland.”

James A. Lovell was appointed as speaker for the three astronauts and he thanked the Mayor and the citizens for their fine welcome. He stated that he hoped to be back to Limerick for a longer stay in the future. He ended reciting a limerick he wrote for the occasion:-

“In Limerick our European tour ended,

And the people a warm welcome extended,

And indeed through Mayor Liddy

In charge of your fair city,

Our hearts to you are surrendered.”

This visit came only days after a visit to Limerick by the American President Richard Nixon.