Who was Patrick O’Brien – The Blind Piper 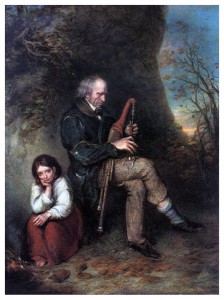 The Blind Piper by  Joseph Haverty 1844.

The Blind Piper, Patrick O’Brien was born in Labasheeda, Co. Clare in the 1773 to a prosperous farming family. He was well educated at a local hedge school. He was fluent in Greek and Latin and was destined for a continental education.

But tragedy struck as he began to lose his eyesight. By the age of 26 he was completely blind and like many blind people of his time took to music as his full-time profession. He played the uilleann pipe (also known as Union Pipe), which is a traditional Irish pipe “píobaí uilleann” (literally, “pipes of the elbow”), from their method of inflation.

The Blind Piper in Limerick

He moved to Limerick City where he attempted to make his name and although he would not become renowned on the professional circuit he would become well known as a street performer. His usual spot was on the corner of Hartstonge Street and George Street (O’Connell Street) at one end of the Crescent.

In his later life, he lived in the Englishtown area of the city, in Pump Lane off Nicholas Street.

He had two daughters, one of whom is supposedly immortalized in the painting by Joseph Haverty in 1844. Haverty gave the original to his patron Sir Robert Gore-Booth, Lissadel, Co. Sligo. Many copies of the painting have been made one of which was presented to the National Gallery of Ireland by William Smith O’Brien in 1864. (ref. Limerick Leader 9 May 1959).

While walking in the city in 1855,  slipped on ice and injured himself. During the following year, without being able to perform he became destitute and one of his daughters had to tend to him full time. She had to pawn many of her belongings to tend to him. A few days after Patrick’s death on 30 November 1856, there was a callout in the local press to assist his daughter with the costs of his care.

The Limerick Chronicle on 3 December 1856 said of this:

He had two daughters, grown up girls, at work, one of them had to leave employmeny to tend him in the last illness. During that periof she was obliged to pledge most of her clothes to provide some comfort to her deing parent. Should the beneovelence of any of our fellow citizens prompt them to assist her in releasing them from pawn, we shall be happy to aid their efforts by recieving and forwarding their subscriptions.

The Limerick Chronicle on 3 December 1856 said of Patrick:

Patrick O’Brien the celebrated old and blind Limerick piper died on Sunday evening, at his lodgings in pump lane, in the Englishtown…

… The artists’ skill has immortalized the Limerick piper. The drawings of the old ministrel, ultimus Romanorum – which were exhibited at all the print shops were much admired.

The Blind Piper was buried in an unmarked grave in  Kilquane, Parteen, Co. Clare in December 1856.

On 14 August 2017, a plaque was unveiled in Knockaphutten, Labasheeda, Co.Clare in memory of Patrick O’Brien, the Blind Piper.