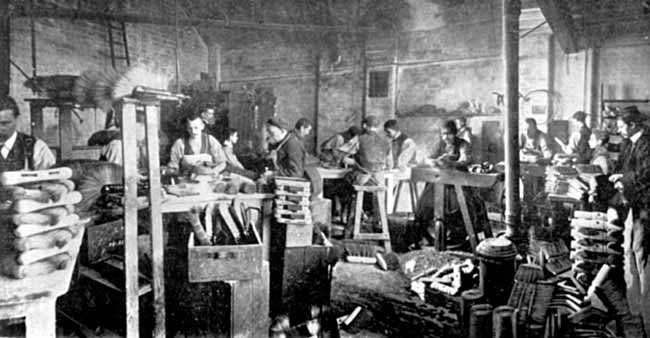 The following report comes via the Sydney Chronicle – 4 September 1847

Between eleven and twelve o’clock on Friday night the citizens of Limerick were alarmed by the cry of “fire” from the parish watch of St. Michael, immediately followed by the tolling of the bell of the Augustinian chapel (quite close to the burning premises), which soon brought a large collection to the scene of conflagration, in Thomas-street, where it was discovered that the, extensive brush manufactory of Messrs. Egan and McCormack was all in flames.
The spectacle was truly appalling, for in ten minutes the flames burst through every window of the building, and presented to view a mass of blazing materials, including valuable machinery, the splendid stock of Limerick manufactured fancy brushes, and every article connected with the trade carried on by the enterprising proprietors of this establishment, which gave daily employment to 250 persons.

The St. Michael’s parish fire engine was the first at the scene of conflagration, and a copious supply of water having been procured from the street mains, was soon in full work, to cut off communication from the adjoining houses, but the blaze from the front partially burnt the top window of Mrs. Hogan’s house, for the safety of which, as ‘well as the entire range of buildings from thence to Catherine-street, Roche’s-street, and George’s street, great apprehension was felt as the dreadful force of the flames, which spread in fearful rapidity, in all direction, menaced destruction to the whole neighbourhood.
The City Police, Royal Horse Artillery, a troop of the 8th Hussars, fatigue and armed parties of the 55th and 59th Regiments rendered great assistance after the fire broke out, and were it not for the extraordinary exertions and incessant labour of the military on this occasion. (Both officers and men), the whole square of buildings would have been consumed. Those who a displayed courage in endeavouring to remove property, in the midst of the flames, and narrowly escaped with their lives by leaping from a high window, were the proprietors, Messrs. Egan and McCormack, Mr. J. Dwyer. (Injured by a fall), Mr. J. Clune, master tailor, Mr. P. Ledger, Mr. M. King, clerk in the factory, Mr. Bennet, and Acting Constable Hardy, by whose united exertions all the books and private documents I were saved.
To protect the factory from destruction was impossible, as the material, naturally combustible served to feed the devouring element, and the Mayor, with whom was Alderman Geary, and Thomas Boyse, Esq., took immediate precautions to prevent impending destruction to the corn store of Mr. Robert Wheeler, Augustinian place, within fifteen yards of the chapel; for had the fire extended, the Roman Catholic Chapel, and all houses on the right and left would have fallen prey to the flames.
The doors of the lofts, and the trap at the top immediately took fire, but the St. Michael’s parish engine having been brought round by Mr. Owens, played with much effect on the front, while an officer ascended the upper loft, and cut away the burning portions of the outer timber. The house of Thomas Miller and Arthur Carmody, contiguous to the burning premises, also ignited, together with a stable adjoining, from whence two horses were rescued by Mr. Francis Coghlan, reporter of the Limerick Chronicle, from whose premises one of the fire engines was supplied with water, these concerns were also saved.
When the fire was. at the greatest strength the thatched cottages from the angle of Roches street and Catherine street, were in the utmost danger, as the burning flakes wafted by the wind in that direction fell upon them; the corner one particularly would have been destroyed but for the able interposition of the citizens, who at the risk of their lives, ascended the roof and flung off the burning particles as they fell. Mr. Dwyer, clerk to Mr. Egan, was much injured.
At five o’clock next morning, the fire was got under, and it is exceedingly satisfactory to state that the factory only (insured for £3000), became a prey to the devouring element. Such was the terror of those females resident in the locality, that many fled their chambers in night dresses, and in most houses the inmates had packed up beds, furniture, ready to decamp if the fire extended; and – if the fire was not suppressed, the Augustinian chapel, and the houses contiguous would have been ignited. The Mayor, John Crips, Esq., Alderman Geary, Alderman Boyse, and a number of citizens rendered efficient service. We regret to add, that Captain McCaskill, 55th regiment, received a wound on the head by the fall of a window sash.