The Double Marriage of Catherine Egan and Charles Moore 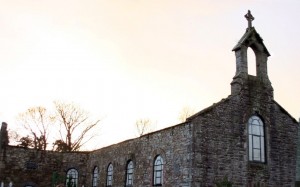 The town of Newport, Tipperary is just over the Limerick border, and many people on either side of this imaginary line have close ties. Proving this fact, the following story of Catherine Egan and Charles Moore starts in Newport and ends in Limerick via Clare.

The Egan family left many lasting links in Newport society, which can be dated back to the early 19th century when Patrick Egan and his wife Bridget Kennedy ran a farm in Cully. Into this farm they bore at least two sons; John, born in 1814 and Michael born in 1816. Bridget Kennedy was a native of Newport and has one of the earliest surviving baptismal records in Newport, her parents Patrick Kennedy and Maria Prittee taking her to the local chapel on the 14 May 1797. Coming from a small town like Newport, their son, Michael Egan would have most likely  grown up with strong ties to his community, he would go on to take over his father’s farm. And as the years went by he took a wife Margaret, who also happened to have the surname Kennedy. Michael and Margaret had at least one child, Catherine Egan, born in 1851. They may have other children called Andrew and Hanora but the record of these are unclear.

In another farm, some where in the county of Laois, ten years prior to Catherine Egan’s birth, a boy was born to Thomas Moore, his name was Charles Moore, but life was destined for more than that of a farmhand. As a 5 foot 8 ½ inch catholic teenager, Charles enlisted in the Royal Irish Constabulary (R.I.C.) on the 12 April 1869 through the sponsorship of Head Constable Smith. He finished his training 24 July 1869 and was deployed throughout many areas in Tipperary North over the next few years.

Catherine Egan was a Newport girl through and through. For down a lane off Main Street in Newport, hidden away from the view of most passers by, stands the chapel where she was baptised, the same chapel as her father and grandmother so many years before. Within the walls of this very chapel the interesting story of Catherine’s double marriage takes place.

Sometime in 1875, as a young girl of 24, Catherine Egan met Charles Moore, the newly appointed R.I.C. officer in Castlewaller.  The two began courting and soon Charles proposed to Catherine. Unfortunately, the journey to wedded bliss was not to be an easy one for the pair as according to R.I.C. regulations of the time, Charles would not be eligible to marry until he had served at least eight years with the force. The reason for this rule was due to the fact that within these first years, the men were moved from place to place and it was more efficient to not have a family or have partial ties to any one location. At the time of their engagement, Charles had only served six of his mandatory eight years.

Although an inconvenience, this did not deter the couple, who took their plight in secret to the local priest, Thomas Meaghan, who presumably assisted in hatching the plan that would result in a double marriage for the two young lovers. And on the 17 November 1875, Charles and Catherine made their way to the Roman Catholic Chapel in Newport, where a religious marriage ceremony was performed. According to records of this “secret” marriage, it had been witnessed by Andrew and Hanora Egan, most likely Catherine’s siblings. Hanora Egan signed her name as Anne on this document and Catherine used her full name.

At some point within the following two years, while the couple were forced to wait to make their partnership public,Charles had been reposted to Roscrea. It is unknown what Catherine was doing during this time, but it is presumed she remained in Newport. But the waiting would soon enough be over. And on the 15 August 1877, when Charles had obtained the proper permission to do so, the four returned to the very same chapel,where they signed the civil register, finally making their marriage legal. On this certificate Catherine Egan signed her name Kate and Hanora used her full name. It is known that Catherine’s father, Michael, had passed away before this second marriage was performed, what is unknown, but heartily hoped, is whether he had been able to witness the first.

Not even three months later, on the 1 November 1877, Charles once again received moving papers from the force. He was deployed to Clare, first to Ballysheedy and later to Labasheeda. Their union now being legal and public, Catherine was permitted to join him. While posted in Ballysheedy, they lived in the same building as the local jail and which in present day is a tourist shop.

Over the years, Catherine had seven children, all of them were born in Clare and six of them survived until 1911.The family remained in Clare until Charles’ retirement from the R.I.C. which he did, on a full police pension, on the 2 August 1898. Afterwards, the family relocated to Limerick city, only four of the children were with them, for this,their final move. Their son Charles Moore would later become a well respected citizen in Limerick City  in 1908,he was the secretary of the United Carmen’s Society. He was elected as a city councillor in Limerick in 1914 and held office until 1917.

Although many of her years were spent in Clare and Limerick, with her husband and children, Catherine Egan never lost her ties with Newport. Despite all of her travelling, her grandchildren were raised on many tales of the Egan’s from Cully.