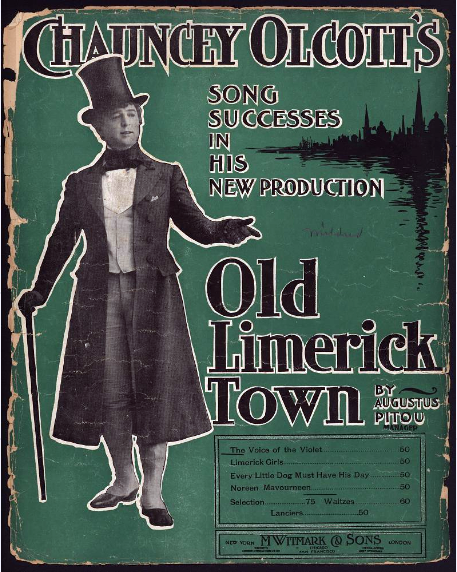 John Chancellor “Chauncey” Olcott was born in Buffalo, New York on 21 July 1858 to Mellen Whitney Olcott and his Irish mother Margaret Doyle . When his mother was eight she and her family left Ireland but settled in an Irish area of New York.

This background was the inspiration for much of Olcott’s work including  the song “My Wild Irish Rose” for his production of A Romance of Athlone in 1899. He wrote the complete scores to Irish musicals such as Sweet Inniscara (1897), A Romance of Athlone (1899), Garret O’Magh (1901). Olcott also wrote the lyrics to “When Irish Eyes Are Smiling” for his production of The Isle O’ Dreams in 1912.

It includes the song Limerick Girls:

They may sing of Scotland’s bonnie lasses and of their heather blue
Of England’s dames so beautiful, their rose of brilliant hue
But Irish girls surpass them all as every body knows
From the land of beauty where the dear old Shamrock grows

She’s pure and fair as you’re aware, a soul of spotless white
A heart when won by her can rest at ease in love’s delight
No fear to wander far or near return when e’er you may
You’ll find that heart awaiting you at night or dawn of day

Chauncey retired to Monte Carlo and died there in 18 March 1932. His body was brought back to New York where he was interred in the Woodlawn Cemetery in The Bronx. His life story was told in the 1947 Warner Bros. motion picture My Wild Irish Rose starring Dennis Morgan as Olcott. In 1970, Olcott was posthumously inducted into the Songwriters Hall of Fame.