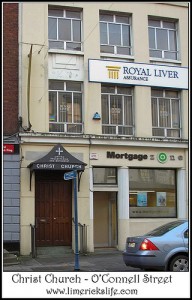 The doorway into Christ Church

Christ Church is a united Presbyterian and Methodist congregation which was formed when the two separate congregations united in the early 1970’s.

In the 1950s to create a rental space the garden in front of the church was turned into a building. Now the only feature of a church on O’Connell Street is the name above the door.

In 2014, the church received a facelift with funding from Limerick City of Culture 2014.