Who was Christopher William Bunting 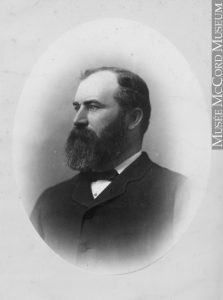 When Christopher William Bunting was born his parents William Bunting and Jane Crowe, could not have imagined where his future lay. He was born on 11 September 1837 in Amigan, Croagh in County Limerick. In the 1850s, following the death of his father Christopher, his mother Jane and younger sister Wilhelmina boarded the Jessy and set sail for a new life in Canada. His widow mother and unmarried sister were living with him until at least 1881.

They quickly settled in Toronto where Christopher continued his schooling at St James’ parish school. He soon moved into an apprenticeship at the Globe, where at the age of fourteen his first steps into journalism was as a compositor. While there, he rose to the rank of foreman and also contributed some local journalism to the paper. After leaving the Globe in 1866, he worked for several years in wholesale grocery. He was also a member of the Masonic Order.

In 1868, he married Mary Elizabeth Ellis and they had five sons and a daughter. In 1873, he moved to Clifton (Niagara Falls). It was here that Bunting specialized in importing sugar with his then business partner of Henry W. Bailey.

In 1877, he once again returned to the world of publishing. That year he entered into partnership with John Riordon and became co-owner of the Toronto Mail. Though Bunting wrote editorials infrequently, he always maintained a close supervision over the news and editorial departments.

While growing his newspaper empire Bunting also entered politics and in 1878 he was elected to the Canadian House of Commons as a Member of the Conservatives. He was one of the Prime Minister John A. Macdonald’s important advisers.

He was defeated in the 1882 election after the Liberals were returned to power. Bunting attempted to lure members from the Liberal caucus. He was implicated in a plot of bribery in 1884. He left the country in May for two months to avoid testifying before a judicial inquiry. In criminal proceedings, which concluded in April 1885, Bunting and his co-conspirators were found not guilty.

From 1887 onward The Mail, which had previously vocally supported the Conservative party distanced itself from political ties to the party. It began to make calls to resist French and Catholic influence in the country. It also added support for commercial union with the United States and endorsed prohibition of alcohol.

By the federal election of March 1891, the opportunities to effect an electoral revolution in Canadian politics along the lines of Anglo-Protestant ascendancy had slipped away.

That autumn Bunting initiated negotiations to reach an accommodation with the Conservative government in Ottawa and these were renewed in 1893. They culminated in another business triumph for Bunting. On 7 February 1895, he secured the purchase of the Empire, possibly for as little as $30,000. Retaining control of the renamed Daily Mail and Empire, Riordon and Bunting rationalized the morning market for newspapers in Toronto and formed a new, official Conservative journal in a single stroke.

By the end of 1895, after the major coop of his career Bunting began to fall ill. He died at his Queen’s Park residence in Toronto of Bright’s disease at the age of 58 and died on the 14 January 1896. It would take six months before the news of his death was reported in the local press. Even then, it was by way of a letter to the Limerick Chronicle from China.