Limerick City in a report in a Melbourne Newspaper 1879 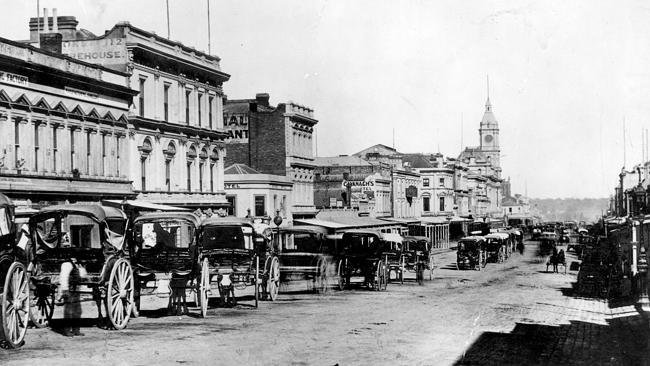 The following is a report of a trip to Ireland in 27 December 1879 by J.H. of The Argus, Melbourne, Australia (The Argus was a morning daily newspaper in Melbourne that was established in 1846 and closed in 1957).

Limerick, the city of the Shannon and capital of Munster, the next stage south ward, is to me a name connected with gloves, lace, and lasses. Being but a short railway ride from Galway, I may breakfast at the one and dine in the other. The city is distinguished for tall houses and many bridges, but shows too much of red brick altogether. When that building material is wet, as is generally the case in Ireland, the impression it gives the traveller is a depressing one. The principal street, George-street, is like its Sydney namesake for crookedness, and is of too limited width, though over a mile in length Could one get a fair view from end to end of it, however, its narrowness might be forgiven.

Here, as with Galway, this capital of the west coast has been terribly drained of its population The fifty four thousand that were in Limerick in 51 are now represented by thirty nine thousand only-the result being half empty looking streets, and the absence of what distinguishes city life elsewhere. Behind long George Street, and parallel with it, runs the queen of the rivers of Ireland it is that Shannon which, like all the other fine things of this land, is best known to me by song, and m its Shelah and dog Tray connexion. It is of goodly breadth, but of shallow depth and stony bed. Here in Limerick city it is crossed by six several bridges, half of the city being on the river banks and the balance on an off lying island. The two are distinguished as old and new, and further than that, as English and Irish, towns The English town is that upon the island portion of Limerick. Like Dublin, the capital of the east coast, this capital of the west is all on a flat surface. Seen from the cathedral tower, all the surrounding country is as a plain, and in some seasons marshy also.

Of the bridges, that distinguish Limerick as squares do Dublin, the most noticeable is that of Thomond. There is a fine Irish flavour aboat that name which is quite in keeping with the old castle that serves almost as one of its abutments. Ere I can cross to get to that King John s Castle as it is called, I am detained at the other side of this bridge by a greater curio and the special one of Limerick. Such is a lump of a stone placed on a pedestal 18ft high. It is supported on a foundation of four step like stones leading up to the base on the side of which are inscriptions. This modernly. erected monument is to an event of nearly two hundred years past On one side I read “The Limerick Treaty Stone, on another, “The Treaty of Limerick, signed A D 1691, on the third is the name of the mayor in whose year of reign this memento was set up, and on the fourth side this piece of Latinity

Limerick calls itself for a second title the ” City of the Violated Treaty,” for the which unpleasant matter this stone like Ophelia s rue, is “for remembrance”. The stranger wanting to know more about it learns that in troublous times, between the adherents of King James and those of King William, Limerick stood two sieges to Londonderry a one. It stood out gallantly, however, in the interest of James, and not of William, and showed that to stand siege well and to die like patriots could be done equally on the western coast as on the northern one. Whatever might be the faith of those so besieged they showed in both cases that good belief in themselves that carried them bravely through.

They might have crowned their great defence as Londonderry did by standing out until the shiploads of provisions came, which were only three days off. Before that aid came, Limerick had agreed to as honourable terms as could have been proposed and accepted on either side. These were sinned, for want of better table, on this “Treaty Stone”. The soldiers of King James, led by Sarsfield, then filed out, and those of King William, headed by their Dutch commander Ginkell, passed in. The latter were in time to share in the shiploads of supplies that, had they come sooner, might have kept them out It may be recalled in these days of war arbitrations and treaties that this treaty of Limerick was violated and ignored by those who took possession of the city solely on its terms

Londonderry, ” The Maiden City,” shows with the pride of all prides, thousands of stones, each one of which is to its fame. They make up those walls which are as its great monument Limerick, however, puts upon a pedestal but one stone, as being that by the use of which she lost the fame she might otherwise equally have won and moat certainly deserved.

I am talking to a young lady at my George street hotel, and ask her more about the town, “its memorials, and things of fame”.

“At the same places, if you don’t meet some hawker with it on the way”

“And where can I see the Limerick lasses, of whose prettiness a the world has heard”

“Well, you are talking to one of them, the rest maybe are on their keeping-out of the way of the wet”

“Condemn the wet! It seems to spoil everything Ia there no show open this evening at which they can be seen?”

“No, the theatre is closed. You had better wait till Sunday and go the round of the churches – if you are not satisfied with what you have seen of them already!”

That last answer was a clincher, and there was no more to say, at least not just then, to this representative of the Limerick lasses. The gloves and lace were to be had, as trash always is, by purchase, but the sight of Ireland’s beauty kept within doors by the rain-” the nasty old rain, as my fair one called it – could not be bought m like manner. Nothtng that is worth having can be got that way.

The most obliging old sacristan at the Cathedral of St Mary takes me around its interior and to the top of it, pointing out all places of interest. He introduced to my notice the bells that hung just handy here in the tower. They are in tone, he tells me admitted by everybody to be finer than “Those bells of Shandon” of which the world has heard. These Bells of the Shannon have had, however, no poet to diffuse their fame abroad, though they as much or more deserve it. The eight of them that hang here in St Mary’s tower were the great effort of an Italian noble, who wasted his fortune on their casting and mixed much of his silver with their metal to refine its tone. In wars that then ensued he was taken prisoner, and when set at liberty found that the bells had been looted by the enemy, and no trace left of their destination they had been his hobby, had cost half his fortune, and were intended for an atoning gift to his own cathedral.

Their recovery filled his thoughts. The rest of his disconsolate life was spent in a search that could hardly be called Quixotic. The bells were somewhere, and he could swear to their sound if he could but catch it. His wish was only to hear them chime, and to know that they hung in a good Catholic Church before he died. His death would be happy if they but tolled for him.

The old man had his wish The desire of his heart was given to him one Sunday eve, when he got to this Limerick, after long wandering a, as I have done now He might have arrived earlier m the week, and waited for the Sabbath, for better reasons, however, than I had been that morning bidden to wait. Who shall tell, save one of Ireland’s eloquent poets, his joy when he heard these bells of Limerick ring out on that Sunday eve’ Doctors tell us that many who linger longer hero than expected are waiting only for something on the coming of which they quietly answer to the Roll Call of Death It was so with the old Italian of this story. He died that night, and sleeps here in the Cathedral churchyard, soothed by the music of the bells that forever ring his requiem.

The sacristan thinks his duties to a stranger as not ended until he has shown me the old house in one of the main streets leading up hill from the river. It is now a deserted and tumble-down ruin, but in it somewhere about 1651 died Ireton, the son in law of Cromwell. For many months in the war which followed the rebellion of 1641, Limerick was held by Lord Muskerry, on behalf of the Catholic cause Ireton, as general of the Parliamentary army, laid siege to it on date first mentioned, and for six months beleaguered it, when the plague breaking out among the besieged the gates were thrown open. The besiegers found the like fate as the besieged had done, one of those seized upon by the common enemy being Ireton himself.

The gloves that go within a nutshell may, I find, remain there for all other use they are likely to be. Lace handkerchiefs are purchasable by the dozen, and from the modest price of a shilling each. They appear to be all lace but a centre piece less than a cheese plate in size. The vendor of these articles tells me that the Limerick lace is but little sold in Ireland, at which I begin to express regret. She sets one’s feelings in a different current at once by saying that it nearly all goes over to the Continent, whence it comes back as the best Mechlin and Brussels, and fetches, under those names, three times its Limerick cost. Something similar, I was told at Ceylon, was done with coffee, which sells beat as from Mocha, to which Red Sea port it is therefore better to send or attribute it. Thus are the wants of the world satisfied, and all parties pleased.