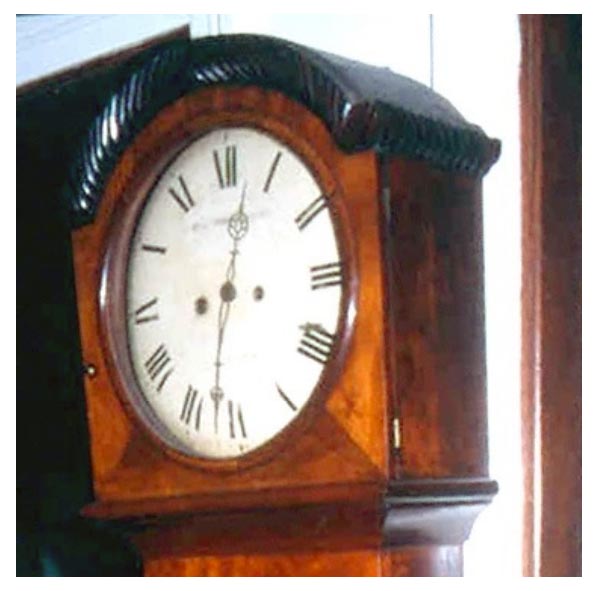 In the Limerick Museum collection stands a simple long case clock with the inscription ‘Robt. O’Shaughnessy/Limerick’ on the face. Robert O’Shaughnessy was a watch and clockmaker born c.1778, by 1809 he was operating his business out of 18 George Street.

O’Shaughnessy would continue to create watches and clocks in this building for over 30 years until his death in 1842. He was regarded favourably and his death notice in the Limerick Chronicle, 12 February 1842, recorded that ‘His upright conduct, and honourable principle in all his transactions in life, endeared him to society’. He was buried in his family plot in St. John’s Churchyard, John’s Square, his wife Mary erected a headstone to his memory.

His body did not rest in peace, and in 1851 it was at the centre of a controversy involving renovation works being carried out on St. John’s Church by the Limerick Corporation. During these works a number of graves were disturbed, including that of Robert O’Shaughnessy who was removed from his grave and ‘disappeared’.

Robert O’Shaughnessy and his son of the same name were not only a watch and clockmaker, but the creator of a new style of fishing hook. The mantel of head of the ‘The original O’Shaughnessy is long since gathered to his ancestors; his present representative is Robert O’Shaughnessy, of 18, George street, Limerick’.

In 1854, Conrad Cromer a German watchmaker married Jane O’Shaughnessy, and he would continue the O’Shaughnessy watch and clock making business out of 18 George Street. Conrad’s family carried on the business after his death in 1903 until at least 1930.

The store passed into the hands of Conrad’s grandson, Robert Evans. Under the guise of Cromers the business claims to have been founded in 1816. Conrad’s unmarried sons are also buried in St John’s Churchyard Joseph Cromer on December 9, 1930 aged 52. George C. Cromer 6 Nov 1948 aged 85.

The Cromers store was badly damaged in the Todd’s fire of 25 August 1959, which destroyed the entire Todds building as well as several others on the block.

After 183 years in business, O’Shaughnessy/Cromers closed its doors in 1999. O’Shaughnessy and Cromer may no longer be trading in Limerick but their legacy lives on as J.J. Kenneally, jeweller of Wickham Street, apprenticed in Cromers in 1944 for seven years.

Update 2021 : Many thanks to Andrew Sawdon who let us know that the families of Cromers, Kleiser (piano tuners Thomas Street) and Hilser (clockmaker, Tralee) were all near neighbours from the same place, the juncture of two valley parishes, Schönenbach and Rohrbach in the Black Forest. Schönenbach still exports clocks to Ireland and elsewhere.