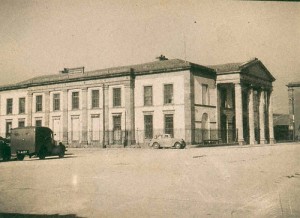 The following was recorded in the Limerick Chronicle on Saturday 29 June 1850.

His Worship in addressing them said – Gentlemen of the City Grand Jury, the calendar is of such a nature as to require no observation from me. I perceive however, that serious riots have occurred in the central ans auxiliary workhouse. Bills of indictment will go before you against some of the parties implicated in these disgraceful disturbances, and I have to request you will give them your best attention, as the offence is one of a very serious and aggravated nature; and should the prisoners be found guilty by the verdict of a Jury, they will be severely punished. It is a great aggravation of their crime, to find that persons who have been maintained at the expense of the industrious rate-payers of the union should be so unmindful of their position and devoid of gratitude as to cause such annoyance in the City, and I trust you will fully investigate the charges preferred against them. There is nothing else that needs comment as I as sure every case will receive your best consideration. The bills will be sent up now.

After the City Grand Jury had retired to their room, it was announced that the County Criminal business would be resumed, a Jury being empanelled, the following convictions took place :-

The Court adjourned at six o’clock.