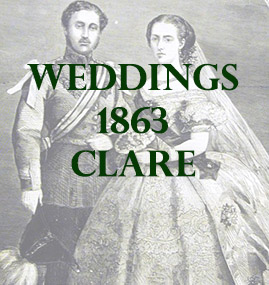 In this city (Limerick) on the 30th ult, Ignatius S. Kelly Esq., of the Provincial Bank, Cork to Teresa, daughter of the late Wm. B. Massey, Esq.

At Castlemagner, Mr. Thomas Magle of Buttevant, to Maryanne, daughter of the late Mr. Timothy Cronin, of Coolnamangh, both in the county Cork.

At Ahabollogue, the Rev. Llewellan C. Nash. to Ellen Henrrietta, daughter of the Rev. William Welland, Prebendary of Cloyne.

At Frankfield Church, Cork by the Right Rev. the Lord Bishop of Cork, father of the bridegroom, assisted by the Very Rev, the Dean of Cork, the Rev Robert S Gregg, M.A. Chaplain to the Bishop to Elinor, daughter of John Hugh Bainbridge Esq., of Frankfield, county Cork

At Rathclaren Church, county Cork, the Rev Wm Clarke Walker, Prebendary and Vicar of Timoleague, to Catherine, daughter of the Rev Robert Halburd, Rector of Kilbrittain and widow of W. Colburn Esq.,

At Buttevant Church, Francis A Twiname, Esq., of Ballyphillip, county Cork, to Kate daughter of Mr Wm McGarry of Buttevant.

At the Parish Church of Whitechurch, county Cork, Charles Garfit Esq., of Wincham, Cheshire to Catherine daughter of the Rev Stephen Gwynne Rector of Agherton

On the 13th inst., at the Lower Shandon, Cork, by the Rev. G.B.Grant, Thomas Prosser of Brooklands Esq., county Limerick, to Eunise Teresa, eldest daughter of the late George Hopkins Esq., M.D. of the H.E.I.

In Cork, Samuel Bleazby, Esq., son of the late Samuel Bleaszby, of the Dyke, to Barbara Jenison, daughter of the late Thomas Morris Esq., of Stoneville, county Cork