In this Guest Post, Liam O’Brien tells us of Limerick’s physical link to the Crimean War:

The attached photographs are of the two Russian Cannon outside the Limerick Harbour commisioner’s office in the docklands (just beside the Clarion hotel). 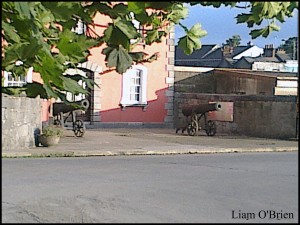 Also interestingly , some parts of the cannon taken were melted down & used to make Victoria crosses (which I believe is still the practice to this day). The part usually melted down was the cascabel which was the “knob” like moulding at the rear of the barrel, used to secure the cannon with rope or chains to counteract recoil while being fired. 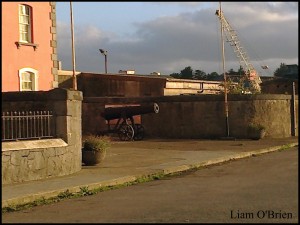 The cannons once stood on Sarsfield bridge either side of the Fitzgibbon memorial (see below) which was blown up by the “old” IRA in the late 20s/early 30s. This is the site where now stands the 1916 memorial. 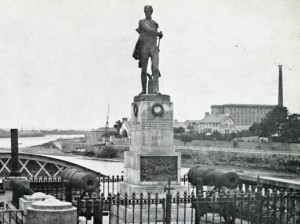 Viscount Fitzgibbon of Mountshannon House (near Castleconnell) fell during the infamous charge of the Light brigade during the Crimean conflict. Ironically, it was Lord Lucan (George Bingham) – a disreputable great nephew of Sarsfield himself who gave the final order for the fateful cavalry charge at the massive battery of Russian artillery in 1854.

Finally, I cannot finish without mentioning that these cannon were of course technically surrendered* twice. The first time in 1855 by the Russians to the French & British armies & the second occasion by the British themselves to the Irish Free state in 1922.

*  “Great to see people taking notice of Crimean heritage. However guns not surrendered they belong(ed) to Limerick City Council.”: Dr Paul Huddie Author of The Crimean War and Irish Society.