The Destructive Storm of 1846 in Limerick 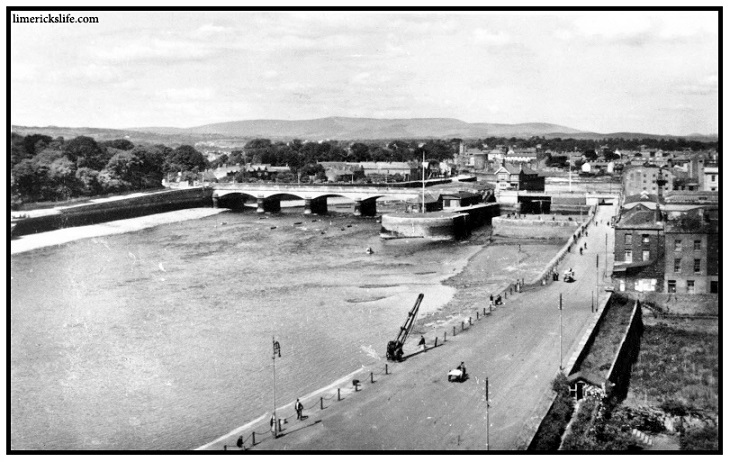 In the wake of the destructive storm Ophelia which roared through Ireland on the 16 October 2017, the following is the tale of yet another storm that hit Limerick. The mid-nineteenth century saw  a multitude of storms, including the famous Night of the Big Winds in 1839 and the Limerick Tornado of 1851.

The following storm happened on Wednesday 21 October 1847 and was reported in the Kerry Examiner a week later (Thank you to Tom Donovan for bringing this to our attention).

Awful and Destructive Storm in Limerick – Accidents on the River – Tremendous Floods and Rising of the Shannon – Loss of Life and Devastation of Property.

This morning (Wednesday) one of the severest gales which this city and district were ever visited commenced about half pat one o’clock a.m. and continued to increase its strength and violence up to three o’clock this day. About four it appeared to be at the height of its fury, and between that and six o’clock it was hardly exceeded in violence by the remarkable storm of the 6th of January, 1839. It seemed to have originated with one of the largest spring tides ever remembered by the oldest inhabitants of this port. The gusts of wing -partaking the houses and made the slates and tiles fly in every direction – were truly frightful. What added to the terror of the night was the cry of “Fire” and the springing of the watchmen’s rattles, which were occasionally heard. This cry proceeded from the fact of a house in the centre of Lower George’s-street having caught fire. the flames were speedily suppressed.

As day appeared the storm seemed to have abated a little. At this time the tide was at its height. The water made its way over the quays, and several streets in the immediate vicinity of the river were impassable, having been completely flooded. The quays as we write, are covered in wrecks of small boats – the fragments of which are being carried away by people for fuel. Several small boats in the river have been swamped. A schooner, in ballast, broke from her moorings and was very near being dashed against the entrance of the dock, near the draw bridge. She would have been made a complete wreck of only for the exertions of the people ashore. It is reported that four men, coming between Coonagh and Tervoe in a boat, were swamped an perished. It would be impossible to give any idea of extent of the damage that has been done along the sides of the river. The greatest amount of injury however seems to have occurred on the south side. Several head of fine cattle, the property of Captain Garrett Hugh Fitzgerald, were carried off from the Quakers’ fields by the high tides, and it is rumoured that four men in attempting to rescue them were drowned.

All that side of the country, up as far as Ballinacurra and down to Mungret, was one vast lake whilst the tide was at the uppermost. Towards Kenry and all along the borders of the Shannnon, the low grounds have been completely inundated and considerable damage has been done. Amongst the numerous accidents reported to us we fin that a smack, the property of J. Norris Russell, Esq., laden with about 200 barrels of wheat was coming from Askeaton to this city was wrecked off Coonagh point opposite Tervoe – most providentially but with great difficulty the crew were saved. Two other boats are also said to have been wrecked near the same place, one of them the property of Mr Peter Hayes, of Carrigaholt.

The Cork mail car which was due at half-past one p.m. according to the new arrangement is overdue two hours and a half as we were, and we have no doubt but other conveyances will be late.

The principal shops throughout town were closed all day in consequence of the violence of the storm. We have not heard that any fatal accidents occurred in town – in the suburbs some of the residences of the gentry have been more or less injured, trees torn up from their roots, chimneys blown down. &c, &c.

The steamer which should have left this morning for Kilrush was unable to sail – not has the return steamer arrived.

Throughout this city a great many windows have been broken.

Just as we write, at half past three, the storm has abated; but the weather wise people say that we shall have a repetition of it on the return of the tide this evening- Examiner.