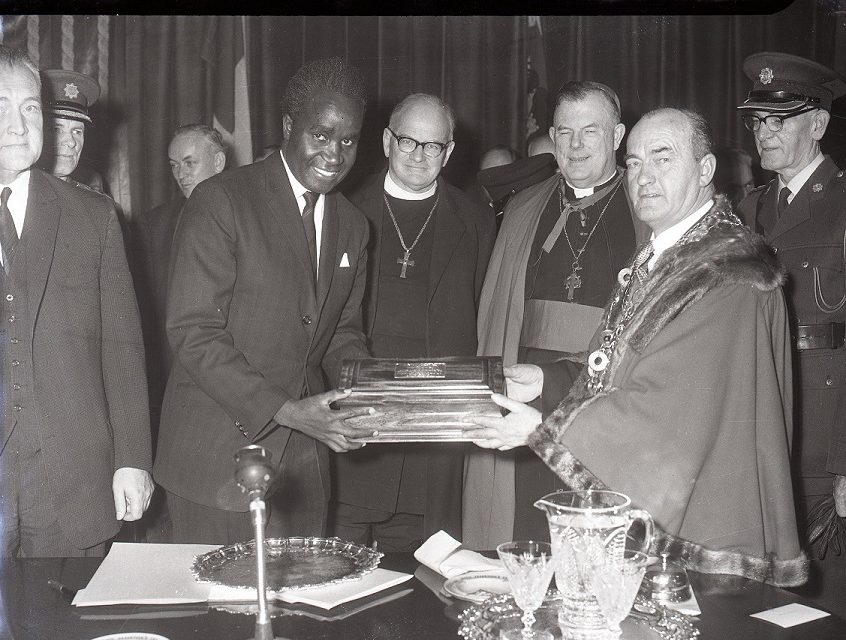 Dr Kenneth Kaunda first visited in Limerick on May 18, 1963 where he spent time with his friend Rev. Fr Robert Thompson, S. J. Crescent College during a three-day visit to Ireland. Thompson, a native of Mallow, had spent the previous 11 years in Zambia, formerly Northern Rhodesia. Kaunda spent the night in the home of Mr T E O’Donnell, Ennis Road, the president of the Crescent Past Pupils Union.

The following year on October 24, 1964, Kaunda would become the first president of independent Zambia. Two weeks later, he would return to Limerick, this time to receive the highest honour in the city.

At approximately 4 o’clock, groups had gathered along the Ennis Road towards the city to try and catch a glimpse of the President on his journey from Shannon to Limerick. The crowds were so large that at the junction of Sarsfield Street and O’Connell Street “special forces of Gardai were on duty to control the crowds.”

At this point, the car came to a full stop and “wild cheering broke out and the president, obviously touched by the scenes leaned over and rolled down the window to acknowledge the cheers of the crowd.” The crowds continued to cheer as he continued up William Street.

As he arrived at the School of Music, Mulgrave Street, the “crowds surged forward to shake his hand. Inside he was given a tumultuous cheer as he took the stand and the Zambian National Anthem was played”.

The reporter gave praise to Mayor Jack Danagher who at “the Municipal School of Music last evening he excelled as he conferred the Freedom of the City on the Irish-speaking President of Zambia, Dr Kenneth Kaunda. It was a brief and very touching ceremony as the President signed his name under that of the late President of the United States of America.”

As Kaunda received the honour, the audience remained silent, until he declared that he was “as much a Limerickman as any of you”. This caused the audience to loudly applaud “his every word and there were many”.

The event was tinged with sadness as Mayor Danagher and “the attendance of 300 cast their minds back some 18 months to think of the occasion when the Freedom of the city was last conferred. Then it was the turn of Cllr. Mrs. Frances Condell to offer the Scroll of Freedom to the late President John F. Kennedy of the United States of America.”

President Kaunda was the 43rd Freeman of Limerick. In attendance were Limerick solicitor, Mr. Thomas O’Donnell, and of course, with his lifelong friend, Father Thompson, S.J. who had attended the President’s inauguration a few weeks earlier. The Leader on November 28, 1964 reported that Kaunda ended his speech with “Go raibh maith agaibh go leir agus go mairidh sibh slan.”

After the ceremony was over Kaunda travelled to Bunratty where he was the guest of the Minister for Education Patrick John Hillery at a private mediaeval banquet. Hillery would later become the 6th President of Ireland. While at the banque, according to the Leader, Kaunda wore headgear that had been worn by the Earl of Thomond in the castle in 1542.

Kaunda was the longest running President of Zambia, holding office for twenty-seven years. As a former teacher, he overhauled the education system. He was instrumental in the opening of the University of Zambia in 1966. Prior to their independence, there were only 109 university graduates in the country. After 1972, he changed the country to a one-party state, he was finally deposed in 1991 and a multiparty government was reinstated. In 2006, he attended Dancing with the Stars America where he stated, “I once danced with Prime Minister Margaret Thatcher in my country”. He celebrated his 94th birthday in April 2018.