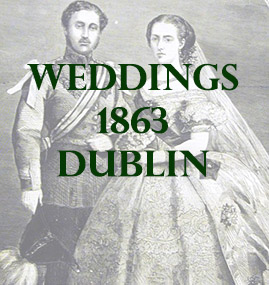 At the Presbyterian Meeting House, Capel-street, Dublin, Marcus Eustace, L.K.Q.C.P. and L.R.C.S.I. of Highfield Drumcondra, to Elizabeth Jane, daughter of the late Andrew Wallace, of Dublin.

In Dublin, James Andrews, son of John Andrews, Esq., J.P., of Courlin, in the county of Down, to Mary Catherine, daughter of Robert Andrews, Esq., LL.D., Q.C., Mountjoy-square, Dublin.

At Hillsborough, Jacob Halliday, Blackrock, Dublin to Annie, daughter of the late John Green, of Orrfield, Hillsbourough, County Down

At Banbridge Church, Edward Hudson Kinahan, son of the late Alderman Kinahan, of Merrion-square, Dublin, to Emily Isabella, daughter of the Rev. Daniel Dickenson, Rector of Seapatrick, county Down.

At St. Peter’s Church, Dublin, Henry Smyth of Holywell in the county od Roscommon Esq. to Alicia daughter of Edward Blakeney, later of Sallymount in the same county Esq.

On the 9th inst., at St. Andrew’s Church, Dublin, John F. Sheehy, Esq., of Court, in this county (Limerick) to Margaret, eldest daughter of the late Bernard Mulrenan, Esq., of this city

At the Church of the Immaculate Conception, Dublin, Hamilton, son of Alban Croft, Esq., Belvidere Place to Cecilia, daughter of the late Patrick Kerrigan, Esq., of Dublin

On the 27th inst., at the Roman Catholic Church, Marlborough Street, Dublin, by the Rev C. O’Reilly, R.C.C., of Killasnet, Kilmore, Manorhamilton, Mr Jeremiah O’Rourke of Limerick to Mary Teresa, daughter of Mr John Welsh, of George Street of this city (Limerick) [No cards sent]

At the R.C. Church of St. Laurence O’Toole, Dublin, Mr. James Garvey of Earl Street in that city to Celia O’Sullivan, nee Ferguson, daughter of the late Dr. Ferguson of Manorhamilton

On the 25th instant at Rathmines R.C. Church Dublin by the Rev M Collier, Michael Egan Esq., of Patrick street in this city (Limerick) to Anna Frances, only daughter of Michael Ryan, Esq., Clare Cottage Athlunkard.

At St. Peter’s Church, Dublin, Henry Newill, Esq., of her Majesty’s Indian Civil Service, to Anna Elizabeth, daughter of Howard Nothercoat Egan, Esq., of Sharragh, in the county of Tipperary

At St. Mary’s Church, Donnybrook, Philip Kerney, Esq., to Annie, daughter of the late Christopher Knight, of the city of Limerick