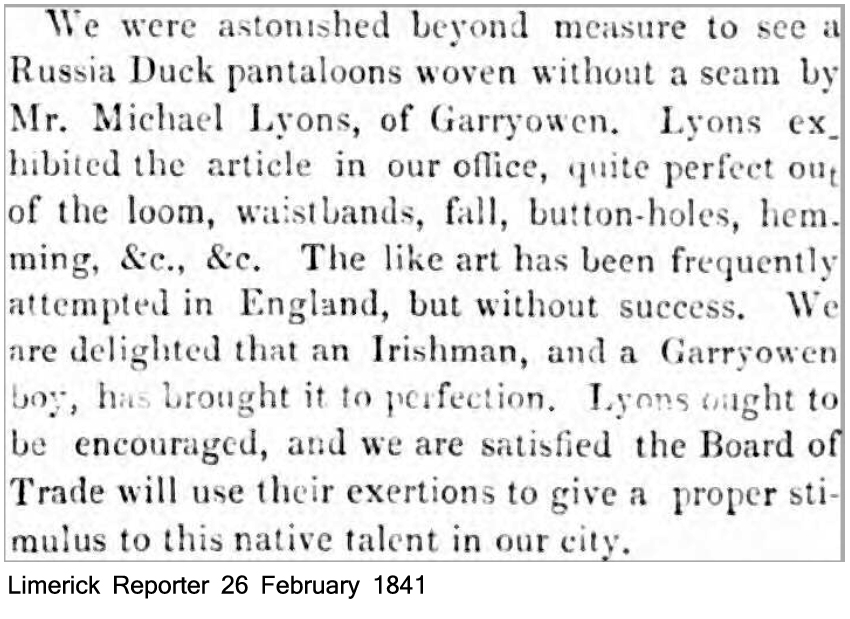 On February 26, 1841 the following notice was posted in the Limerick Reporter. It detailed how Michael Lyons of Garryowen, had invented a seamless Russia Duck Pantaloon. The article goes on to detail the construction of these pantaloons.

“Lyons exhibited the article in our office, quite perfectly out of the loom, waistband, fall, button-holes, hemming, &c. &c. The like art has been frequently attempted in England but without success. We are delighted that an Irishman, and a Garryowen boy, has brought it to perfection.”

From this first report a sum of money was raised in the city to allow Lyons to create another two pairs of the pantaloons in a higher quality material which would be gifted to Prince Albert and Daniel O’Connell from the citizens of the city. It was displayed at the Irish Manufacturers Exhibition held in Limerick on 19 March 1841. (ref. Limerick Chronicle 20 March 1841, Limerick Reporter 09 April 1841)

Russia Duck Pantaloons were often worn by the military in the early nineteenth century. In 1807 they were part of the standard issue clothing for each Sergeant, Corporal, Drummer and Private Man in the British Army. They were issued annually with: A coat, a waistcoat, a pair of blue cloth pantaloons and a pair of half boots. Every two years they would receive a cap.