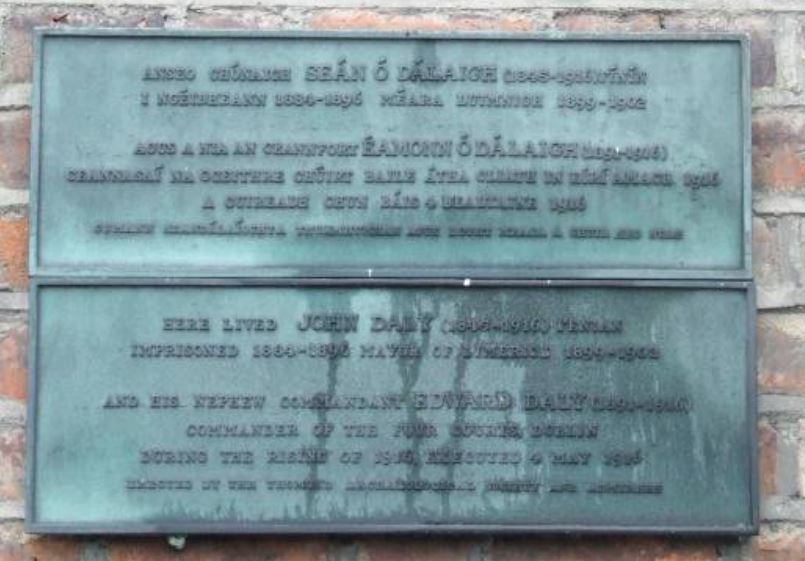 This never been seen before video clip of Eamon De Valera unveiling a plaque in honour of John and Ned Daly on Barrington Street in 1966. It was filmed by Eamon O’Connor and uploaded by Newcastle West Olden Times.

The clip shows a view of Limerick from the Tower of St Mary’s Cathedral. It also shows street scenes before finally showing the plaque being unveiled. The plaque was erected by the Thomond Historical and Archaeological Society. You can read more about it in this May 21, 1966, Limerick Chronicle article

Eamon De Valera was born in New York City on October 14, 1882. To Catherine Coll (from Bruree, County Limerick) and Juan Vivion De Valera (an immigrant of Spanish origin). In 1885, after the death of his father, he was sent to live with his Irish mother’s family in Country Limerick.

He graduated from the Royal University of Ireland in 1904 and became a mathematics teacher. In 1913, he joined the Irish Volunteers. During the 1916 Easter Rising he was Commander in Boland’s Mills after which he was imprisoned for life, but was released a year later.

Even though he was still in prison at the time of the 1918 General Election, he was elected as the Sinn Féin representative for East Clare and appointed President of the newly assembled Dáil Éireann.

He rejected the Anglo-Irish Treaty of December 1921 and resigned as President. During the Civil War, he led the Republican forces but was defeated by the Free State government.