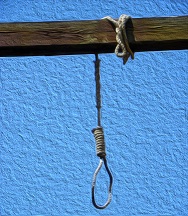 In the period 1835 to 1899 there were 237 people executed in Ireland, including 13 women. The following are the people who were executed in Limerick during that period, and their victims.

Original list of names with kind permission of Capital Punishment UK. Included where possible is a link to the newspaper report of their death, from the Limerick City Library Local Studies directory of Obituaries from The Limerick Chronicle.

The execution Gavin Brothers in 1836 was watched by the Gavin’s surviving brother and a few thousand people, mostly women. Mingling with the crowd were pick-pockets who were very active.

In the 1920s there were three Limerick men who were executed by firing squad in Limerick, these were:

Although there were other Limerick murders executed these took place in Mountjoy, Dublin and not in Limerick. These included people such as Annie Walsh (30) and her nephew Michael Talbot (24) who were hung on the 5 August 1925 for the murder of her husband Ned Walsh (61).

The last person executed in Ireland was Limerick man Michael Manning (25) on the 20 April 1954, for the rape and murder of Catherine Cooper (60).