The first 100 years of Quinlan Street. 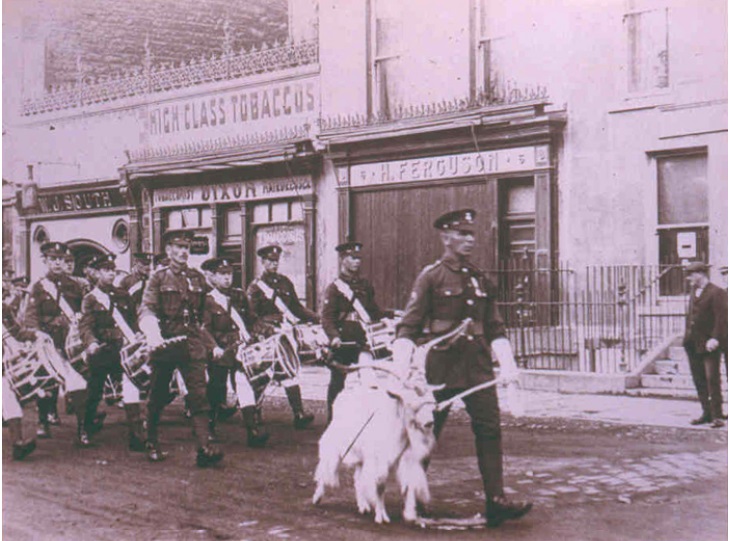 Quinlan Street, located between the Crescent and O’Connell Avenue, is one of the shortest streets in the city. It is also one of the shortest main streets in Ireland, having a length at its centre of eighty-five feet. Containing only seven buildings with two building on the corner with Barrington Street and five on the corner with Newenham Street. The following is a snapshot of Quinlan Street over a period of 100 years between 1837 and 1937.

Thomas Quinlan (c.1780-1843) founded the street in 1837 by constructing two houses known as numbers 1 and 2 Quinlan Street along with numbers 22-55 Barrington Street. In 1858, Thomas’ son James Thomas Quinlan (1808-1875) renewed the ground lease from the Earl of Limerick at a rate of twenty-eight pounds, three shillings and two pence. This rental agreement also included the Barrington Street buildings. Robert O’Callaghan Newenham leased the site of 3-7 Quinlan Street in 1801, with the Newsom family taking over the lease in 1865.

In the 1880s, John Byrnes added another building to the street in an old mews entrance. Located where W J South’s is currently. As a result, the buildings previously numbered 4, 5 and 6 became 5, 6 and 7. In the present day, number changes would be confusing for letters arriving to a building but in the nineteenth century, the house numbers were not vital on postal addresses. For the purpose of this article, the buildings numbering is in accordance with how they are today.

The Newtownpery area in the early to mid-nineteenth century was a highly sought after location to live. The early residents were people of considerable wealth coming from the merchant and landed gentry classes. The first known occupier of number 1 was Captain Thomas Jervis (1800-1853) from at least 1838 until his death. Jervis was the elder brother of the English Chief Justice of the Common Pleas. Jervis’ obituary painted him in a very favourable light stating ‘few men have there been who had more friends or less enemies, or who less forfeited the esteem of the former, or deserved less censure of the latter’.

The first occupants of Quinlan Street

While the first known occupant of number 2 was Thomas Masters Usbourne (1811-1883), a corn merchant. In 1837, Usbourne married Margaret Hillier at St Mary’s Cathedral and the couple soon moved into Quinlan Street. Usbourne owned 2,600 acres in county Kerry, 872 acres in county Clare and 677 acres in county Cork. He moved to Blackrock, County Cork before his death.

Anne O’Grady Westropp (-1856), she was an early occupier of the Newenham side of the street. She was the widow of William Johnson Westropp (-1818) of Roxborough and sister of first Lord Viscount of Guillamore Standish O’Grady, Attorney-General for Ireland and Lord Chief Baron of the Exchequer for Ireland. Anne lived on the street for at least ten years until her death. Anne was the mother of Elizabeth Westropp (1810-1897) the second wife of John Augustus Ievers (1800-1876).  John and Elizabeth lived at number 7 Quinlan Street. It is unusual that the Ievers chose to live in Quinlan Street as John Ievers, was the second son of William and Ellen Ievers of Mount Ievers, County Clare. He became heir to his father upon the death of his older brother William in 1812. He inherited Mount Ievers from his father in 1830. However, he instead lived at Ieverstown, just west of Mount Ievers before moving into Quinlan Street some time before 1867 perhaps moving into the former home of his mother-in-law.  Elizabeth Ievers remained in Quinlan Street until her death in 1897.

Number 3 was the home of Elliott and Sarah O’Donnell in the 1860s. When Sarah died 1870, her son Robert continued to live there until 1879 before moving to England. John W Gibson was the next resident in the 1880s, with John Wallace replacing him in the 1890s. In the early 1910s, the building was converted into a girls high school and the first teachers were Miss Lizzie Croston, Miss Harold, Miss Mercier, Miss Tuckey and Miss Latimer. The building used as a school today. By 1928, the Royal Liver Insurance company was also operating out of the building.

In 1913, the South family arrived into Quinlan Street, establishing one of the most famous pubs in Limerick at the new number 4. The pub was originally called the Crescent Bar.

Public houses were popular on the street as Next door at number 6, Anne Brady ran a one in the 1870s. Dorothea Susannah Dartnell (1821-1892) an unmarried ‘gentlewoman’ occupied number 6 during the 1880 and until her death. She was the daughter of Rose Frewen and George Dartnell a prominent solicitor who was the secretary of the Freemasons in 1847.

In April 1901 there were only 50 people living on Quinlan Street. This jumped to 82 ten years later. Those on the street in 1901 included the family of John Vickery at number 7 who described himself as ‘Proprietor of a Posting Establishment’. This family travelled extensively as John was born in Cork, his wife Louisa was born in England, their eldest two children William and Louisa were born in Country Limerick, their second son George was born in Queens County. While both their youngest daughters were born in Limerick city.  Within five years, the family had moved again this time though, only to 18 Barrington Street. Sadly, their eldest son William passed away in Johannesburg, South Africa in 1906. The post office known as The Crescent Post Office remained in the building.

The Fitzgerald family were residents of the street for at least ten years from 1901. The head of the family Augustine Desmond Fitzgerald was a Professor of Music (Organist). Ten years later his 75 year old father John Fitzgerald, a retired mechanical engineer was living with the family. Another resident musician was Yorkshire man James Childe (1850-1915) a violinist who married Limerick woman Mary O’Connor in 1895.

Quinlan Street had other talented occupiers in 1901 twenty-five year old Eliza Templeton of Scotland was staying with the Hewson family, headed by Anna the managing director of a laundry. Eliza was as an artist in photography. That same year fifty-two year old Octavius Wallace shared a house with is twenty-eight year old wife Helena O’Sullivan and their three young children. The couple married in Dublin when Helena was only twenty-two years old. Octavius outlived his young wife by twenty-one years.

In 1911, Kathleen Maud Davis was one of the few telephonists in the city, she was living with her aunt Isabel White and her cousin, the aptly named Frederick Bell. Also in 1911, Arthur and Caroline O’Connor had eight of their surviving nine children living with them, only one of whom was under the age of eighteen. Arthur O’Connor’s was a bakery manager while his children worked in various stores throughout the city as clerks, typists and sale assistants.

This article barely scratches the surface of the shortest street in the city, it show the variety of people who lived in each section of the city.