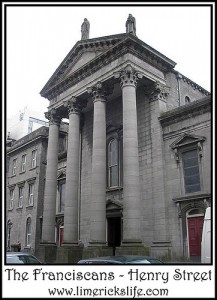 The Franciscan Church on Lower Henry Street sits on the site of an older chapel built in the 1820s. The foundation stone of the new church was laid by Dr. Butler, Bishop of Limerick, in May 1876. The builders were McCarthy and Guerin and the architect was William Corbett. The church was completed in 1886. The Dominican Church has been renovated on two occasions: in 1928/30 when it was also extended and in 1968. Since June 2008 this church remains closed.

The Franciscans were present in Ireland for about 700 years originally located a Friary near Sir Harry’s Mall. Thomas de Burgo established this first monastery. The monastery became known as Saint Francis Abbey, the name it retained during the Suppression. The Abbey River, Abbey area, and Abbey Fishermen derive their name from the Abbey located in the area. The friars were expelled from the city for a short time in 1651, during which time it is said that the Abbey Fishermen fed them.

After this, they successfully regained occupation of their residence at the junction of Athlunkard Street and Nicholas Street. A site in Newgate Lane was acquired in 1782, on which a chapel and friary were built.