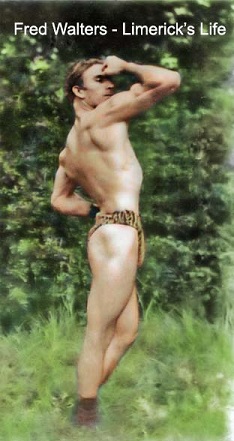 Fred Walters was born 13 Mar 1917 at 1 Quarry Road to Jeremiah Walters and Elizabeth Anne Beer. His family were known entertainers. His mother was a concert pianist while his brother was also a talented musician. He moved to Yorkshire in the late 1930 and later married Mary (known as Betty) Zimmerman. The couple relocated to Sydney, Australia in 1959, where they both passed away in 1994.

On the 2 October 1943 the following report was carried in the Limerick Leader:

A Limerick city man, Mr Fred Walters, aged 25, performed some amazing feats of strength at a fixture in England recently. Describing him as “Ireland’s strongest youth,” the “Yorkshire Evening News” had the following references to his performances:-

“When the gigantic, sun bronzed Fred Walters strode to the field, complete in leopard skin trunks, there were cries of approval from the crowd. He held them spellbound with his feats of strength, which included bending a steel poker 2 inch diam. by striking it on his forearm; bending bars of steel on his head; lifting an 11st. man with one hand, and 75 lbs. dumb bell with the other; supporting three men (460 lbs) on his bare stomach, etc”