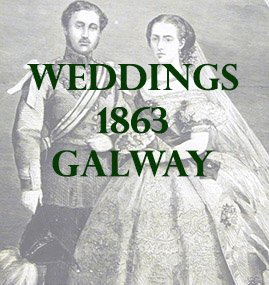 At Gort, John G. O’Dwyer Esq., of Ennis to Jane Mary, daughter of the late Richard Molony, Esq., of Gort

At Ballinasloe Church, Mr Richard Cantrill, of Mullingar, to Eliza, daughter of the late Mr Geo Hanly of Ballinasloe.