Mysterious Marriage of One Woman and Two Hartigan Brothers 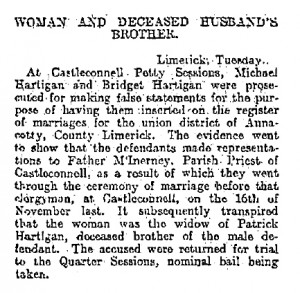 Bridget O’Connell was the centre of a marriage scandal between two brothers, Patrick and Michael Hartigan of Pennywell.

Patrick and Bridget were married on 24 February 1900. According to the 1901 Census, they were living in 68 Pennywell, Limerick. Patrick, aged 28, was a jarvey man (a taxi driver) while Bridget, aged 21, was a housekeeper. Between 1901 and 1907 the couple would have three children, Mary Ellen, Patrick, and Daniel.

In 1907 the young Bridget Hartigan would become a widow. Patrick Hartigan died and was buried in Mount Saint Lawrence Cemetery in his family grave (V 125) on the 25 March 1907. This was the second early death in the Hartigan family, Patrick’s brother Thomas had died only 2 years earlier aged only 28.

After her bereavement, it seems as if Bridget went back to live with her mother Mary O’Connell nee Hayes, a widowed shopkeeper in Rivers, Lisnagry, Co. Limerick.

This was not the end of her contact with the Hartigan family, she remained extremely close to her husband’s brother, Michael. So much so that in November 1909, two years after the death of her first husband, Bridget, Michael, and possibly Mary O’Gorman, a servant from Rich Hill, went to see the local parish priest in Castleconnell Rev. P. McInerney.

Their visit to this priest was the beginning of their marital problems, as he was not too interested in the couple who wished to be married two weeks later. While under oath he could not remember which woman had issued their name for the record or even which date the marriage was to happen. He recorded Bridget’s name as O’Gorman and the marriage date as the 14 November instead of the 16 November. As a result of the marriage confusion, it was discovered that the newly enforced “Deceased Wife’s Sister’s Marriage Act 1907” only covered England and that a woman marrying her dead husband’s brother was still illegal in Ireland and would remain so until 1914.

It was only after speaking with the clergy in St. John’s Cathedral that Rev. P. McInerney decided to bring the case to the proper authorities, which by all accounts seems to be more about stopping a public scandal than finding an issue with the marriage. During the trial, Leviticus was cited, which was quickly rebuffed with “that is Jewish law but we are dealing here with British law”. Rev. P. McInerney let the court know that this was not a marriage in the eyes of the church without a dispensation and that in his view a dispensation would not be granted.

Rev P. McInerney believed that Bridget had deceived him by saying that she was Bridget O’Gorman, a spinster living in Rich Hill. There was a Mary O’Gorman who fitted this description who may have accompanied the couple on their first visit causing the confusion. Bridget’s mother could not recall if her daughter was going by Hartigan or O’Connell after the death of her first husband.

The couple was brought into court for the first time in March 1910 and by May 1910 the couple’s marriage had been annulled. During this waiting period, Bridget had become pregnant with Michael’s son, Thomas Hartigan, who was born in June 1910. Tragedy would strike the Hartigan family once again as the baby Thomas Hartigan would pass away in March of 1911, aged 9 months. He was buried in the same grave as his uncle and grandparents in Mount Saint Lawrence Cemetery.

By April of 1911, Bridget was once again living with her mother in Rivers, and was recorded as a widow. Interestingly, Michael Hartigan was living with his parents and he was recorded as married, strangely with the stipulation (wife living in county Limerick) on his census form entry.