Exploring The Heart Of The City 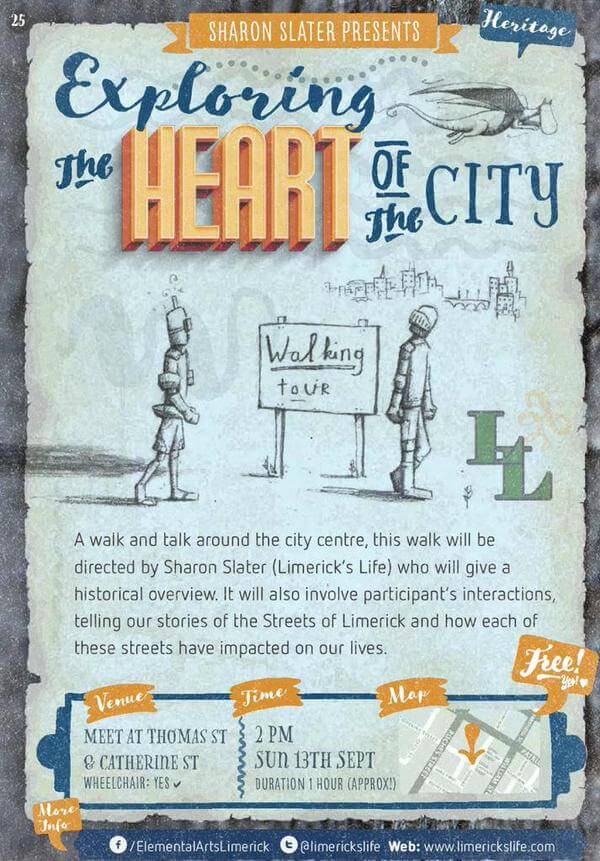 We were thrilled to be part of the Elemental Arts and Culture Festival again this year. Each year it grows from strength to strength. Our 2014 contribution was on Limerick Clocks, while 2013 was on Roche’s Hanging Garden.

Our contribution this years was a walking tour exploring the Heart of the City, the tour began at the corner of Thomas Street and Catherine Street and despite the rain we had over twenty people turn out. We had a sea of umbrellas which became our walking roof.

We set off up William Street where those on the tour reminisced about Boyd’s and Newsom’s. Then onto Wickham Street where we talked about Cahill’s the oldest tobacco shop in Limerick and Black Spot records. Down to Roches Street, where the sights, sounds and smells of the many bacon factories were brought back to life. We could almost hear the squeals of the pigs.

Back onto Catherine Street and up Cecil Street, where we past the Theatre Royal, and spoke about some of it’s many uses and visitors through the years. On Dominick Street, our modern history was the replacing of the carpet in Costellos. Down Glentworth Street we discovered that we had a night porter from the Glentworth hotel in our midst.

Onto O’Connell Street, we past a few ghost signs, which connected with the Love Signs event taking place in FabLabs. We veered back up Roches Street to see the Cat with Tow tails and listening to the owner of Sadliers tell us about the horsehair insulation in some of the buildings. We returned to Thomas Street where we followed the final path of Michael Scanlan.

Everyone left with a slightly different view of Limerick, with new stories to pass onto other people and with very soggy socks.