Interview with the Past, Abbey Fishermen

The following is a transcript of an interview conducted with the of the last Abbey Fishermen which was aired on RTE’s Summer Signpost program in 1993. The three men interviewed Gerard “Riley” Clancy, Gus “Music Man” McNamara were cousins while, Patrick “Poppy” Clancy was Riley’s nephew. Poppy was one of the last Clancy’s to be buried in the family grave in St. Mary’s Cathedral. 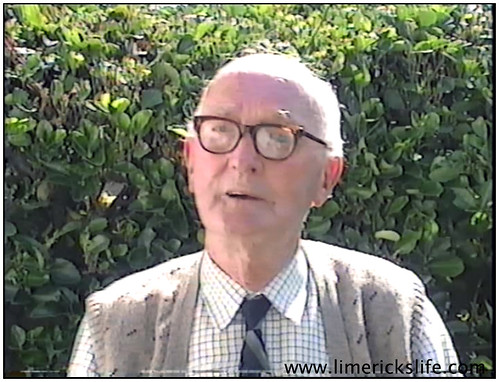 Gerard Clancy: “It ended up with four families the Shanny’s, the MacNamara’s, the Clancy’s and the Hayes’s. The Clancy’s happened to be the strongest there, there were so many of them there. There was forty eight men on twelve boats. There were two boats to every four men.”

Gerard Clancy: “Snap net now it would take two boats to use it. Salmon would swim in and you’d feel him the very minute he hit that net no matter how light he hit it and you’d shout “Eee” and pull away . You’d kill him once you got him in.”

(Regarding the division of the river)

Gus MacNamara: “They divided the river into twelve sections, innues we use to call them”.

Poppy Clancy: “We use to all them innues”.

Gus MacNamara: “Ye probably would call it the stations you know. Plassey Falls was the centre there were six stations below the falls and six stations above the falls”.

(Regarding the names of the stations)

(Regarding the lowering of the river level) 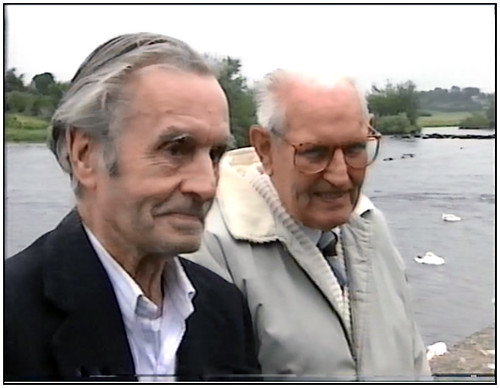 Gus MacNamara: “It lowered the level of the water and the water coming out of the turbines came out so powerfully strong that it went right across the river and the salmon coming up when they met the current, nature made them turn into the current and that current took them up into the tail race”.

(Did that destroy your livelihoods?)

Gus MacNamara and Poppy Clancy: “Ah, yea it did”.

(Regarding the Battle of the Tail Race)

Poppy Clancy: “Twelve gangs of us the Hayes’s, the Mac’s, the Clancy’s and the Shanny’s. We all in the brocauns down below Willie Fords place. We collected together and made our plans. Next thing we went across the river there into the tail race. We were like a crowd coming along in canoes.”

Gerard Clancy: “At twelve o’clock that night we went in and we fished and the guards were there of course, but they didn’t do much trouble the first night. But the second night we went in a bit earlier it was in broad daylight around maybe seven or eight o’clock. So we fished away but the bailiffs were taking our nets and taking our boats and the guards were helping and the military came out to help. We fought back with everything we had we didn’t use any rough stuff. We fought with going in and out and in and out. For a whole week you could say, we were going in and out dodging this fella and dodging that fella. The public was really behind us that’s one thing I would say, the public was behind us.”

(Regarding the after affects)

Gerard Clancy: “If we were fishing today on that river, I’m telling you we’d be starved off it. STARVED. I think it was the greatest blessing although we didn’t agree with it that they bought us off of it. But we’d still be there yet no matter what.”