The Tragedy of James Kerley

At the turn of the last century, as today, there is an all too high rate of suicide in Ireland. Although, unlike today, the graphic details of the attempts used to be recorded in the local newspapers. At the time it was illegal to attempt suicide and as a result the inquest would often return a verdict of “temporary insanity”. It was only as recently as 1993 that suicide was decriminalised in Ireland, making it the last country in Europe to do so.

The following is the tragic story of a farmer and cattle dealer James Kerley, who under financial pressure chose to take his own life, leaving his wife and family behind. James Kerley was the son of Cornelius and Hanora Kerley, who were also farmers, as were all his brothers. The family were known to have suffered from mental illnesses as James’s father, brother and sister had all at one time been committed to the Lunatic Asylum, his sister was actually in the institution at the time of his death.

James Kerley and Catherine McNamara were married in 1885 and they had 7 children. Mary 1885, Hanora 1887, Mary (Minnie) 1889, Catherine 1890, Patrick 1892, Bridget (Delia) 1893, James 1896. By 1901 Mary, the first child and Hanora, the second child were not living with their parents. And as their third child was also called Mary, it is presumed that the first Mary had passed away, though no death certificate has been located. It is a complete mystery what became of Hanora, who has not appeared on any census or death records since her birth. 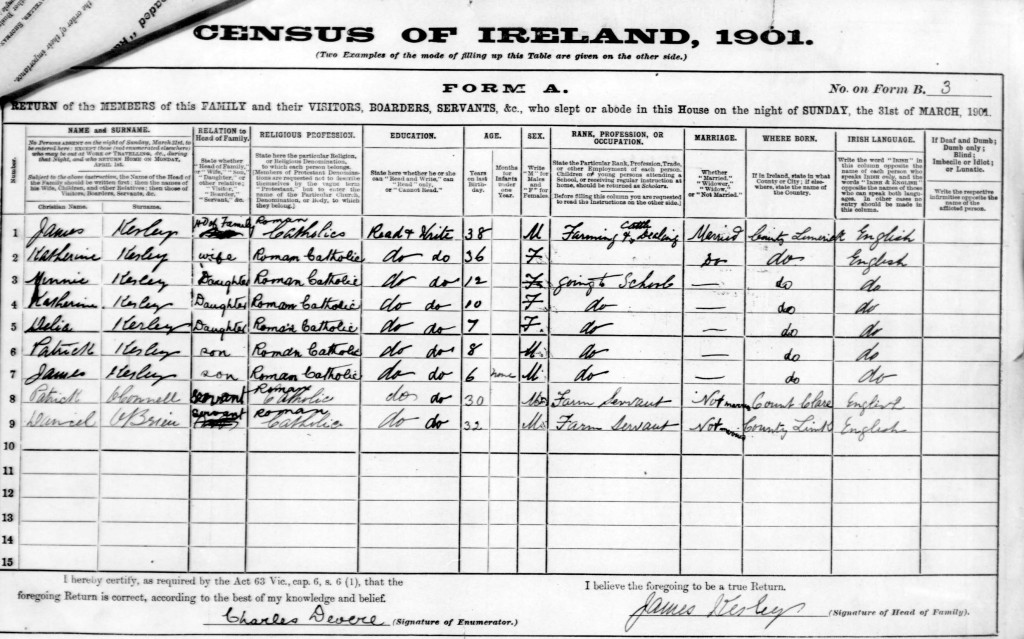 In the 1901 census they also had two farm servants living with them so from outward appearances they seemed financially stable. This was not the case from late 1899 to mid 1901. James Kerley had been in court no fewer than 5 times, which was unusual as he was generally found to be a law abiding citizen. All but one of these cases were for the none payments of rates to the city. His financial difficulties culminated in a seizure of his cattle in September 1901. Catherine knew nothing of the money troubles her husband was experiencing.

On Monday morning the 16th September he woke at 5:30am and at 7am told his wife that he would not be long and headed into the city. He headed straight for J. & G Boyd’s department store on William Street and to the pharmacy where George Trousdell opened the shop to him. James bought a sixpence bottle of butyr of antimony and three ounces of arsenic. Trousell did not bat an eyelid when James told him they were for scalding a cow as he was a well known cattle dealer in the city.

At 7:30am when he returned home, he asked his wife Catherine for a glass of water and went into the parlour. About ten minutes later Catherine heard him vomit and quickly sent for Dr. John Holmes as well as James’s brother Denis who lived in Ballysimon with his parents. It was soon discovered by Father Cregan, who was also in attendance, that James had swallowed the arsenic but as he had vomited some of the poison it would him take until 6pm that evening before he succumbed. When asked why he did it he answered “the wrong document at Bennis, I could not bear the scandal of it.” It is still unknown of what or who James was referring to, though there was a Joseph Bennis who was a prominent business owner in the city at the time.

An inquest was held into James’s death the following day and it was concluded that his death was due to arsenic poisoning administered during insanity. This inquest was reported in the Limerick Chronicle.

He was buried on the 17th of September in Mount St. Lawrence Cemetery at the age of 43 (his age varies on records from 38-43).

The story did not end there for the Kerley family as for all those who are the living survivors of suicide. His wife Catherine passed away only two years later at 2 Roxboro Road, at the age of 40. She was also buried at Mount St. Lawrence Cemetery on the 13th of April 1904. She left behind five children: Mary, aged 14, Catherine aged 12, Patrick aged 11, Delia, aged 9 and James aged 8.

In July 1910 the daughters Mary (Minnie), a Governess, and Delia, a teacher left Ireland for New York on board the Cunard ship Campania, a journey that took them 17 days. Their brother Patrick, who was working as a labourer joined them in 1915. In 1911, the son James was living in a boarding school in Roxboro. The search is still on to find the daughter Catherine.

For a period in the 1886 – 1893, James was running the public house now known as Nancy Blake’s on Denmark Street.

James’ brother Michael left Limerick arriving in New York 14 June 1906 heading home to Chicago. He died at 703 South Blvd, Chicago, Cook, Illinois where he had work as a fireman, passing away on the 15th Apr 1924. Michael served with the American army during the First World War.

Dr. John Holmes had been in attendance at the mass poisoning in Laurel Hill a few years previously.