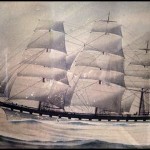 In early 1834 before the James and the Astrea (who also was wrecked in 1834, a first hand report of that wreck from a survivor of the Astrea) left Limerick Port a government official was appointed to access the seaworthiness of both these ships. Lieutenant Lynch R.N. inspected both ships and after they both failed to reach their destination he was discharged from duty.

It was said of the James at the time “reported, to have been near half a century old. What a crazy hulk was appropriated for human freight and no wonder she was destined to be the coffin of so many”

The following list are named all those who boarded the ill-fated emigrant ship the James at Custom House Quay Limerick destined for America.

The most poignant are those travelling from the village of Golden in Co. Tipperary to America. This village lost 55 members of her community.

The original news report from the Limerick Chronicle 28 June 1834 can be seen on the Limerick City Library Local Studies Section.