Who was John Francis O’Donnell?

The early life of John Francis O’Donnell is cloaked in mystery. John was born on 29 July 1837, the only child of John O’Donnell and Mary Fitzgerald. His place of birth is a matter of debate, as it is cited as Gerald Griffin Street (Cornwallis Street), Nicholas Street, and also Upper William Street in different records. There is very little known about the O’Donnell family. Some of the only records that can be found indicate that John’s father was either a shop keeper or painter, but died at a young age. Even less is known of John’s mother, who was still alive at the time of his own death in 1874.

John received his primary in Leamy’s School and his secondary education from the Christian Brothers. It was apparent from an early age that John was adept in languages and writing. He was fluent in both French and Latin, and even knew some German.

While the above is the only information available on his childhood, there is a great deal of information about John’s professional life. At the tender age of 17 he became a journalist at the Munster News and soon after rose to become the sub-editor of the Tipperary Examiner. His talent for writing was quickly noticed across the sea and in 1860 at the age of 22 he joined the Universal News, a London paper with Catholic and Irish nationalist leanings. 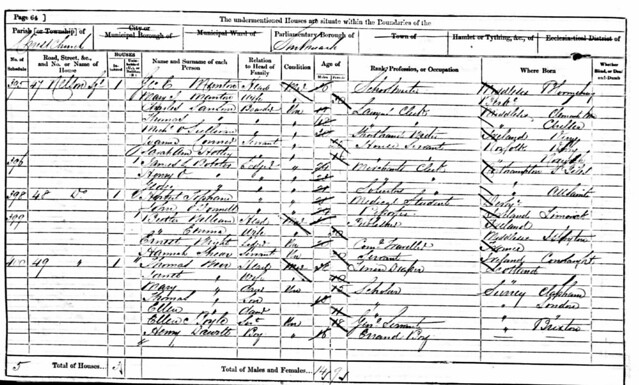 In 1861 John was a lodger in St Saviour Southwark, Christchurch London and employed as a reporter. In the house he lodged there was also a medical student, solicitor and 2 merchant clerks. He returned to Ireland briefly at the end of 1861 and spent a few months writing for The Nation in Dublin and also acted as editor of Hibernian Magazine. Over the next two years he travelled back and forth between Dublin and London working on the above publications as well as the Universal News. On his permanent return to London in 1863 he edited the Fenian journal The Irish People before moving to The Tablet in 1865 where he would remain as editor until 1868.

In 1864 his book “The Emerald Wreath. A fireside treasury of legends, stories” was published by James Duffy, a rare copy of which is held in the University of Limerick. This was followed in 1871 with his book, “Memoirs of the Irish Franciscans”, which commemorates the Counter-Reformation in Ireland. In the early 1870s he wrote of the land agent, John Sadlier, and of Irish evictions, writings which appeared in The Nation and The Lamp.

John didn’t just write for news, journals and book publishers. He was also quite skilled at poetry, which was extraordinarily favoured by Charles Dickens’, who published a number of his poems in “All the Year Round”. Furthermore, in his varied publications, he wrote under the pseudonyms: ‘Caviare’ and ‘Monckton West’.

Once again, there is very little information regarding John’s personal adult life, other than the note that he had a fine beard. In 1871 John was listed as head of his household on 21 Victoria Road, Islington, London. He lived there with his wife Jane (32) from Clonmel Co.Tipperary and children Mary K. (6), Jane (5) and John H. (2). John was married to Jane in about 1864 and all of his children were born in Islington, London. John Francis O’Donnell died on the May 7, 1874. He was only 37 years old and passed away after a brief illness. He was buried at Kensal Green, London. 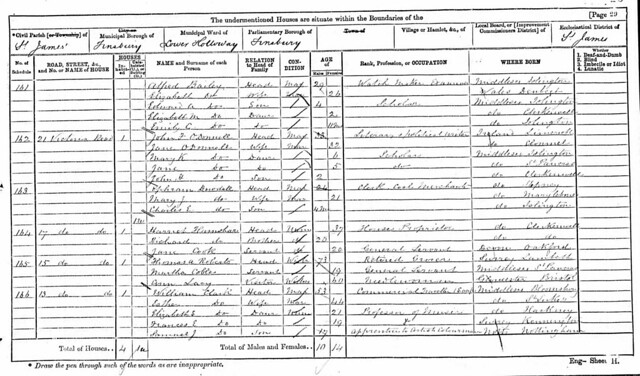 Several of his poems live on to bear witness to how much John always loved and retained fond memories of his native city. For example, he writes to a Clonmel man in January 1872: “You call Limerick the city of dullness. So it is. But give it to me a million times before the capital of Tipperary.”

He wrote of Limerick::

O dim delicious heaven of dreams-
The land of boyhood’s dewey glow-
Again I hear your torrent streams
Through purple gorge and valley flow,
Whilst fresh the mountain breezes blow.
Above the air smites sharp and clear-
The silent lucid spring it chills
But underneath, move warm amidst
The bases of the hills.

He wrote of the Adare ruins:

Chancel, quadrangle, tower are here,
Gaunt cloisters, roof and mullions riven,
With that clear interspace through which
Souls, tired of flesh, looked out to heaven.

A patriot poem “A Spinning Song“:

My love to fight the Saxon goes,
And bravely shines his sword of steel;
A heron’s feather decks his brows,
And a spur on either heel;
His steed is blacker than the sloe,

And fleeter than the falling star;
Amid the surging ranks he ’ll go
And shout for joy of war.
Twinkle, twinkle, pretty spindle; let the white wool drift and dwindle.
Oh! we weave a damask doublet for my love’s coat of steel.

Hark! the timid, turning treadle crooning soft, old-fashioned ditties
To the low, slow murmur of the brown round wheel.

My love is pledged to Ireland’s fight;
My love would die for Ireland’s weal,
To win her back her ancient right,
And make her foemen reel.
Oh! close I ’ll clasp him to my breast
When homeward from the war he comes;
The fires shall light the mountain’s crest,
The valley peal with drums.

Twinkle, twinkle, pretty spindle; let the white wool drift and dwindle.
Oh! we weave a damask doublet for my love’s coat of steel.
Hark! the timid, turning treadle crooning soft old-fashioned ditties
To the low, slow murmur of the brown round wheel.

In 1888, Michael MacDonagh began a course of articles in the Dublin Evening Telegraph on ” Irish Graves in England.”  expressing a hope that John Francis O’Donnell’s grave would not be forgotten. Mr MacDonagh replied that it was the sight of O’Donnell’s neglected grave which suggested the series to him. As a result the Southwark Irish Literary Club raised a memorial to “Caviare“.

In 1891, Richard Dowling edited his Poems for the Irish Literary Society.

In 1905 a plaque was raised in the wall of what was Griffin’s Funeral Home on Gerald Griffin Street written both in English and Irish: John Francis O’Donnell Patriot Poet born in this house 1837. Erected by Limerick Young Ireland Society 1905 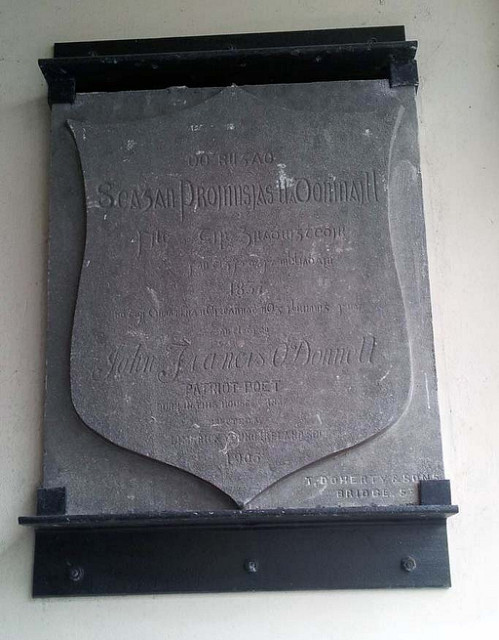