Who was John O’Grady? 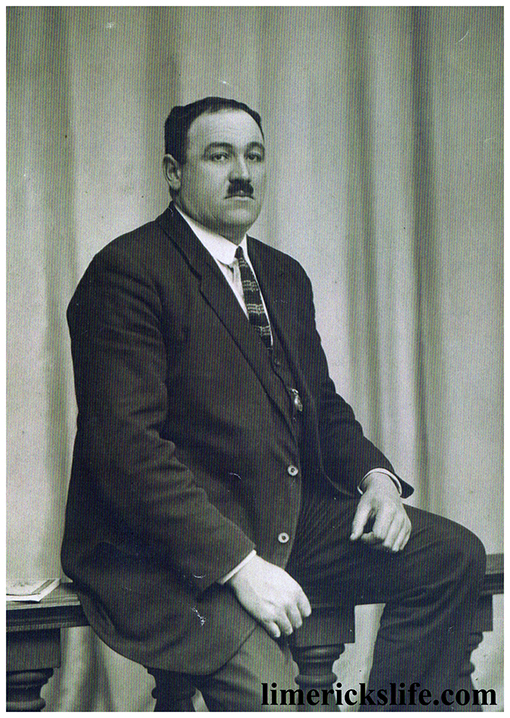 John O’Grady, a champion weight thrower, was born 17 February 1891 (though he was often recorded as born in 1892) in Ballybricken, Co. Limerick. His parents were William and Catherine O’Grady, who were farmers. His mother Catherine died when John was only 6 years old, leaving his father William to raise five young children on his own. The family was on the 1901 census for Ballybricken. John was still living with his father in 1911 and was recorded on the census for that year. His parents and many of his siblings were buried in Kilmurry, Caherconlish.

John stood over 6 feet tall and weighed more than 18 stone, a formidable sight, but all who knew him mentioned his jolly disposition.

He was a world record breaking weight thrower. He represented Ireland in the 1924 Summer Olympics and was the country’s flag bearer. He participated in the shot put, which he threw a distance of 12.75 metres which placed him 17th in the Olympics.

In his later years, he was the rates book inspector for the Limerick County Council.

He died 26 November 1934,at his home in ‘St. Kevin’s’ Alphonsus Terrace, Limerick. His funeral took place in St. Michael’s Church (R.C.) and he was buried in Kilmurry, Caherconlish.

Erected by his admirers in proud memory of John O Grady World’s Champion Weight Thrower born at Ballybricken, Co. Limerick 17th Feb 1892 Died at Limerick 26th Nov 1934 He worthily upheld Ireland’s Athletic prestige and endeared himself to all by his loveable character and simple bearing.

Pushing 56 lb (or from the Sholder)

The monument on Mulgrave Street, Ballysimon Road to John O’Grady was filmed in Rediscovering Limerick Episode 6.