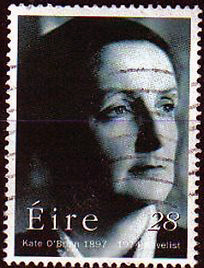 Limerick was the birth place to world renowned author, Kathleen Mary Louise O’Brien, or as she was more commonly known, Kate O’Brien. Her novels were some of the earliest examples of Irish literature to feature homosexual themes, which ultimately lead to them being banned on release by the Catholic patriarchy in Ireland.
Kate was born in Limerick on 3 December 1897 to Thomas O’Brien and Catherine Thornhill. She was one of ten children born into this wealthy Catholic horse dealing family. They lived in the distinctive redbrick Boru House on Mulgrave Street, which Kate’s grandfather had purpose built and decorated in 1880. Although the family have long since departed the house, many of the original features, including horseshoe paintwork in the interior, remain to this day.
Tragedy struck the young family in 1903 when Kate’s mother, Catherine, died of cancer. Kate was just over five years of age at this time and joined her sisters and became the youngest boarder at Laurel Hill convent school. From there she continued her education in the University College Dublin, where she graduated with a degree in English and French.
Following her graduation, she moved to London, where she worked as a teacher for a year; before moving to the Basque Country, in the north of Spain in 1922-’23 where she became a governess. It was during this year that she began to write fiction in her free time.
On her return to England, Kate O’Brien worked at the Manchester Guardian for a period before the release of her first successful play, Distinguished Villa, in 1926. After this she took to full-time writing and in 1931 was awarded the James Tait Black Prize for her debut novel, Without My Cloak.
In the 1930s Kate’s popularity grew, and with it so did her notoriety. As a feminist her novels promoted gender equality and often featured protagonists who were young women yearning for independence. While not entirely uncommon in today’s modern world, at the time these were fairly new and radical themes in popular literature. As a result her work came in direct conflict with the recently formed Censorship of Publications Board in Ireland (CPBI) of 1929.
The CPBI was introduced in an era of political isolationism, as well as cultural and economic protectionism. The culture of Post-Independence Ireland was extremely moral and religious, claiming a Catholic population of 93%. The CPBI aimed to prevent the introduction of unwholesome foreign influences, such as ideas on materialism, consumerism and immorality, from abroad. Specifically, this meant protecting the Irish people from works that were considered to be “indecent or obscene, newspapers whose content relied too much on crime, and works that promoted the ‘unnatural’ prevention of conception or that advocated abortion”.
Irish writers who were found offensive were officially regarded as agents of decadence and social disintegration who were striking at the roots of family life and moral decency. As a result of the themes within her works the CPBI censored two of Kate O’Brien’s novels: First, Mary Lavelle, written in 1936, and then, The Land of Spices, written in 1941. The reasons given were based on scenes of homosexual encounters and adultery that presented themselves in her stories.
Ireland was not the only country to censor O’Brien’s novels. Spain, which had been her earlier home and about whom she wrote a political travelogue, Farewell Spain, also censored Mary Lavelle, which was inspired by her experiences in the Basque Country. Farewell Spain was not apolitical, but released to in an effort to gather support for the leftist cause in the Spanish Civil War. Throughout her life, O’Brien felt a particular affinity with Spain, which was apparent when she wrote about the life a Spanish mystic, titled Teresa of Avila; and when she later used the relationship between the Spanish king Philip II and Maria de Mendoza to write the anti-fascist novel, That Lady in 1946.

Kate’s last finished novel , As Music and Splendour, written in 1958. contained a lesbian romance was central theme. This novel was set in the 1880s and 90s and tells the stories of two girls, Clare and Rose, who are sent from Ireland to Paris and Rome for training as opera singers. As they travel further from home, both pursue romances that conflict with the values they have been taught growing up. In particular, Clare’s lesbian relationship is an affirmative experience through which she grows and learns to understand herself.
Kate O’Brien’s determination to encourage a greater understanding of sexual diversity in several of her books, including positive gay and lesbian characters, this made her a pioneer in gay literary representation. Though like many other Irish writers and artists of her time, she lived much of her life in England. She died in Faversham, near Canterbury, on 13 August 1974. She has been remembered annually since 1984 in Limerick with a literary festival in her honour.

This article was first published in Fusion Magazine in May 2015.