Who Was The Very Generous Lady Banks?

Mrs. Anne Banks, was born about 1718, she was married to Louth man Samuel Banks. The Banks family were in Ardee, County Louth from approximately 1660.  Anne Banks would make Limerick her home and would pass away a widow at the grand age of 90 in September 1807 in Charlotte’s Quay. In her will she donated intially over £8,768  to local charities this would equate to approximately €865,900 today, plus the interest on this sum for several years.

Her final resting place was in Kilnasoolagh Church, near Newmarket-on-Fergus County Clare where her plaque reads on the south wall reads:

“Near this spot are deposited the remains of Mrs Anne Banks of Limerick widow who bequeathed property exceeding £3000 in trust for such charitable uses as to her executors should seem fit in the wide distribution of her bounty the poor of this parish (in which she long resided and the infirmary of Ennis and the principal public institutions, of the city of Limerick were permanently endowed). As a tribute to her memory and to record such munificence this slab has been erected by her surviving executors the Rev Lewis & Daniel Gabbett Esq under whose care the above sum nearly trebled its amount 1828.” (ref. Journal of the Association for the Preservation of the Memorials of the Dead, Ireland, 1910. Vol. VIII. No. 1.)

The church under which she was buried in 1807 was replaced in 1815 by a new building designed by James Pain, who designed many of the buildings in Limerick.

A plaque was also raised in honour of Anne Banks in St. Mary’s Cathedral in 1828. Her philanthropy to Fever Hospital, the Female Orphan Asylum, the Lying-in Hospital, the House of Industry, the county Infirmary, and the Dispensary would live on for another 30 years at least. In 1834 the estate donated £68.3.8 to the House of Industry. In 1860 there was still £30 of the interest from Anne Banks’ contribution being donated to the County Infirmary.

The representatives of Mrs Banks were Governors for life at the Fever and Lock Hosptial (St. John’s). The executors of her will were James Cooper (d.1827), Reverend William Lewis (d. 1892) and Daniel Gabbett (d.1848) a who as a solicitor living at Strand House.

If you have any other information on this lady and her family please contact us. 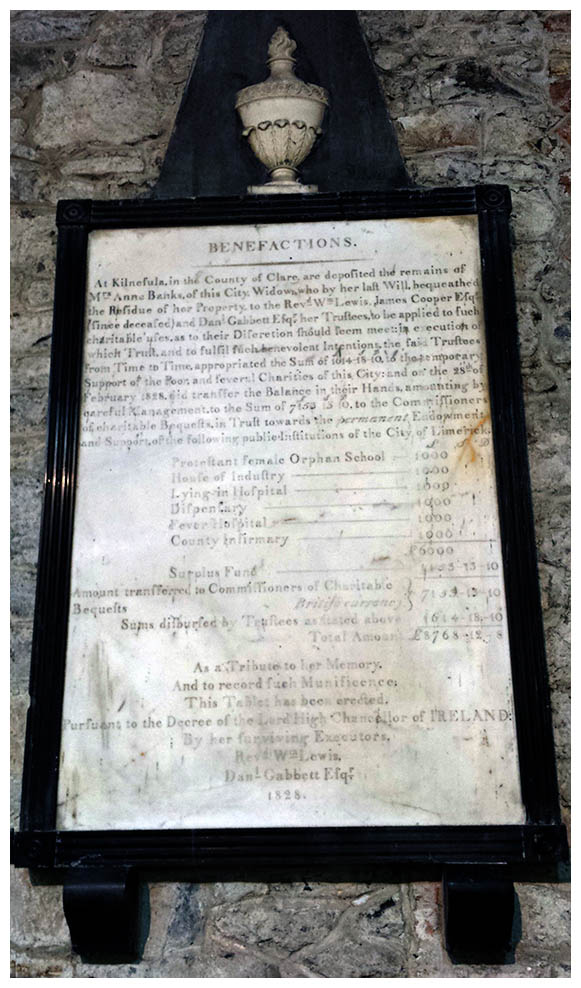