Who was Liam Redmond? Actor of the Stage and Screen

Liam Redmond was born in Limerick on July 27, 1913, the youngest child of Thomas Redmond and Ellen McAlister. His father Thomas Redmond was a Sligo born carpenter who also taught woodwork and technical graphics, his wife Ellen was born in Louth. The couple married in Armagh in 1902 and lived in Dublin for a period where they had their first child Mary. They then moved to Limerick in about 1905 where they would have their remaining four children, Ellen, John, Thomas, Liam, and finally Eileen in 1915. In 1911 the family was living in Ballinacurra. Sadly, his siblings Ellen (aged 6) and John (aged 4) both died in Limerick in 1912 while Mary passed away as a young adult. Neither Thomas nor Eileen married. 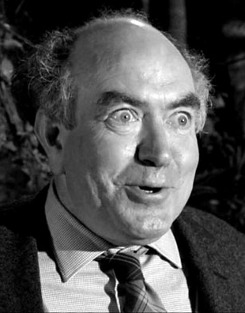 Liam Redmond attended a Christian Brothers primary and secondary school in Dublin. After secondary school, his sights were set on a medical degree from the University College, Dublin, while there he became heavily involved in the UCD Dramatic Society. Noted playwright and poet, William Butler Yeats, attended Liam’s production of T.S. Elliot’s ‘Murder in the Cathedral’. Sensing Liam’s talent Yeats invited him to join the Abbey Theatre in 1935 as a guest producer.  Yeats went on to write his play “Death of Cuchullain” specifically for Liam to produce.

In the same year, 1935, Liam made his Abbey Theatre acting debut in Sean O’Casey’s “The Silver Tassie.” In 1939, he made his first stage appearance in New York in “The White Steed.” He left America at the outbreak of WWII and played regularly on the London stage, returning from time to time to the Abbey for a season or performance. Some of his more sterling performances overtime included “The Playboy of the Western World”, “Juno and the Paycock”, “The Square Ring,” “The Doctor’s Dilemma,” “Loot” and “The Island”.

The actor joined the Dublin Verse-Speaking Society and occasionally read poetry on the radio. Following the war in the 1950s, Liam went back to New York playing Canon McCooey in “The Wayward Saint” on Broadway which won him the George Jean Nathan Award for his performance.

Liam was a well-rounded actor which lead him easily into roles both on film and TV. He was a regular on such British TV series such as “Z Cars“, “Doughlas Fairbanks Jr., Presents“, “Swizzlewick“, “You’re Only Young Twice” and “The Avengers“. His extensive filmography can be seen below. He was often a requested actor for the likes of Walt Disney and played opposite Elvis in Kid Galahad.

Clip of Liam Redmond as Professor Swain in The Avengers

Liam Redmond retired to a quiet life in Dublin in the late 1970s, following a decade of declining health, and later passed away aged 76 in Dublin on October 28, 1989. He was married to Barbara MacDonagh (17 August 1936 – 17 November 1987), who he had met while he was the Director of the Dramatic Society and she was the Secretary. They had four children. Wife Barbara’s brother was Donagh MacDonagh, who was not only a judge but a playwright, poet, and author.

A report in the Limerick Leader in 1960 of his role in the drama Under Ten Flags.

His filmography is as follows:

Many thanks go to Liam’s daughter Muriel for supply details of Liam’s family life.