The following are only five ways in which Limerick people have influenced the way we live today. We could have also included others who were associated with Limerick such as John P. Holland (1840-1914) the inventor of the submarine joined the Christian Brothers in Limerick in his youth and the Irish Coffee which was invented in Foynes, Co. Limerick in 1943.

1. Limerick Man Who Made The World See

Sylvester O’Halloran born in Limerick in 1728 was pioneering in many respects, but his most influential legacy was the cataract surgery. Without Sylvester’s skills and documentations, millions of people throughout the world would have remained blind.

He also founded Limerick’s first maternity hospital to which he donated his time and skills freely.

No Christmas dinner table would be complete without a ham, a Limerick Ham to be precise. We also have to thank Queen Victoria for this one as she insisted on having a Limerick Ham for her Christmas Dinner and so made it a custom throughout the English speaking world.

The traditional way to cook a Limerick Ham was to take a smoked ham, steep it in cider overnight and then bake at a high temperature until golden brown and delicious.

3. A Limerick Plan in New York?

Limerick in the 1800s was at the forefront of modern architecture, Newtownpery was a built to a grid plan that can still be seen today. One of the men who mapped Limerick, Christopher Colles, later moved to New York. Where a few years later a grid plan was also implemented in Manhattan.

New York GridThere is often a dispute over this issue though Limerick piloted the grid pattern in 1765 while the Manhattan grid plan project began in 1807. Limerick at the turn of the 18th century was a centre of design and development, there is little doubt that the designers would have known about the Limerick project and been influenced by it.

The instantly recognizable Confederate Army uniform of the American Civil war came all the way from Peter Tait’s Limerick factory. Tait’s connection with the Confederacy began in earnest in December 1863, when 50,000 caps, greatcoats, jackets, trousers, shirts, blankets, boots, stockings, and haversacks were ordered by the Confederate Government. 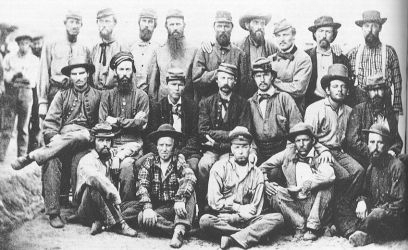 Peter Tait also pioneered the use of an assembly line for manufacturing clothing in his Limerick factory, now the standard method for most commercial production. Henry Ford is reputed to have copied Tait’s ideas for the manufacture of cars.

Would Jane Austen have been the prolific romantic novelist if it were not her love loss, Limerick-born Thomas Lefroy the man who broke Jane Austen’s heart? In a letter dated Saturday (9 January 1796), Austen mentioned:

You scold me so much in the nice long letter which I have this moment received from you, that I am almost afraid to tell you how my Irish friend and I behaved. Imagine to yourself everything most profligate and shocking in the way of dancing and sitting down together. I can expose myself however, only once more, because he leaves the country soon after next Friday, on which day we are to have a dance at Ashe after all. He is a very gentlemanlike, good-looking, pleasant young man, I assure you. But as to our having ever met, except at the three last balls, I cannot say much; for he is so excessively laughed at about me at Ashe, that he is ashamed of coming to Steventon, and ran away when we called on Mrs. Lefroy a few days ago.
. . .
After I had written the above, we received a visit from Mr. Tom Lefroy and his cousin George. The latter is really very well-behaved now; and as for the other, he has but one fault, which time will, I trust, entirely remove — it is that his morning coat is a great deal too light. He is a very great admirer of Tom Jones, and therefore wears the same coloured clothes, I imagine, which he did when he was wounded.